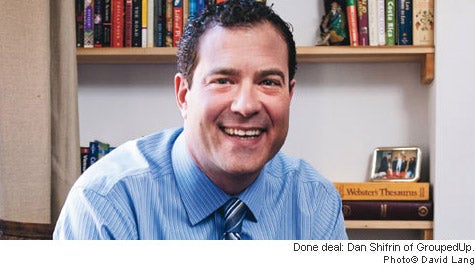 It's no secret that franchise financing has gone belly up--and Dan Shifrin knows it firsthand.

Shifrin, the New York City-based founder of Autowraps, which wraps cars in advertisements, and a former executive at ZipCar, wanted to buy a franchise last year. But after getting turned down for a loan, he instead decided to use his money to create two websites that match potential franchisees with investors.

Potential franchisees and investors can create a profile on GroupedUp , the public site, or FranEquity, his private branded site for individual franchisors, saying where they're located, how much they'd like to invest and what kind of business they'd like to own. The software then hooks up undercapitalized local investors. Once a group is formed and reaches 40 percent to 50 percent equity, the minimum amount to secure a loan these days, the site arranges an online meeting among group members. If all goes well, the site directs them to attorneys to create a corporation, set up contracts and so forth.

If the partners sign a franchise contract, Shifrin gets a cut of the franchise fee, which can reach thousands of dollars, and a 1.5 percent slice of the equity invested by the website's users. Since launching in November, GroupedUp has had a steady trickle of sign-ups, but it's really making waves among franchisors. So far, more than 30 companies--including LawnDoctor , Boston Pizza and Cartridge World --have developed their own FranEquity microsites to make matches for potential franchisees. We asked Shifrin how his idea could change franchising.

Can strangers be business partners?
Every time you franchise to an individual, you're strangers. Every time I've raised money for any business, it's been with strangers. We're always doing business with strangers. Good legal is the key. You have to have good agreements and decide on the vision and exit strategy. I'm not saying some deals won't fall apart, but I think we'll vet out most of the problems.

What about underqualified people?
Companies get hundreds of leads, and 97 percent of them are undercapitalized. That's crazy. What's important to franchisors is people's professional backgrounds, not the money they bring to the table.

How might this change franchising?
Franchisors are paying out the nose for leads, but they're not happy because those leads are underqualified and under-financed. Now franchisors have a chance to take that lead and maybe create value from it. If we have 500 FranEquity platforms out there in 18 months and add a social networking component, we can have a lot of power. Imagine creating a GroupedUp or FranEquity profile and putting it on Facebook or Twitter and broadcasting to your contacts that you're trying to buy a Subway and you're looking for an investor with 25 grand. That's powerful.

And when banks start lending again?
I'm rooting for a slow recovery. But regardless of whether credit eases, there will always be a need for people to raise their equity profile. I like to think we not only help get entrepreneurs into the industry who wouldn't be there, but we also help individuals, stimulate the economy and create jobs.