How to Handle a PR Crisis

Ronn Torossian's advice: Drop everything and deal with it now.
Next Article 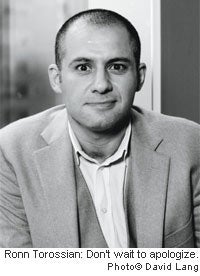 Q: How do I deal with a PR nightmare?

A: There are times when you can get away with burying your head in the sand, but a business crisis isn't one of them. You need to drop everything and fix it. Now.

"Small-business owners think they can put their heads down and outwork everything," says Ronn Torossian, founder of 5W Public Relations, based in New York. "But you can't outwork crisis. For the people it impacts, it will feel like the end of the world."

Torossian has seen major corporations, small businesses and celebrities through a fair number of troubling times (Lil' Kim's perjury case and financial scandals of a Fortune 100 company). By now, he's got a few standard rules for managing crises of any scale.

First, he says, come up with a message that addresses what went wrong and how you'll handle it. Don't wait to apologize.

Then communicate that message to everyone who's been affected--in person, if possible. A newsletter won't cut it, and letting the media provide updates will make matters worse. And don't pass things on through lawyers or spokespeople. Delegating raises the probability of more disaster. Warns Torossian: "It won't keep your employees from all walking out or vendors from suddenly saying, 'We want immediate payment because we don't know if you're going to be here next month.'"

Work on your delivery, too, because how you say things in public can be more important than what you actually say. (Wrong: Tiger Woods' 13-minute ramble of an apology. Right: Bill Clinton's direct, sincere four-minute apology.) "Americans are very forgiving, but they need to believe you actually care," Torossian says. So leave the script at home and be prepared for scrutiny, because if you're uncomfortable, it will show. Do everything you can to make yourself and your audience more comfortable--grab water, enunciate, avoid jargon and fancy words and be ready for discussion. "Speak compassionately and honestly, and don't pretend to be on a higher level than your audience," he advises. "It's the best way to put people at ease."

In the end, be resigned to some fallout. Not all will be forgiven, but you can minimize the damage. Fortunately, Torossian says, small-business owners can move faster than big companies, and they should take advantage of that.