West Wireless Health Institute is kick-starting innovation in two realms that need each other's help.
Next Article Add to Queue 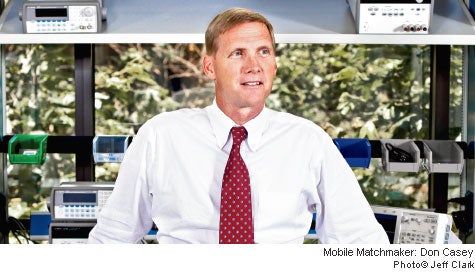 If the business world were a romantic comedy, the healthcare and wireless sectors would be the two strangers at a party locking eyes across the room but too scared to close the gap. Even as healthcare works to create smaller and more innovative devices and wireless continues to rapidly expand the boundaries of how and where we compute, neither has found a reliable way to work well with the other.

That's where West Wireless Health Institute enters the scene. Launched in March 2009 and funded by more than $100 million from the Gary and Mary West Foundation, this not-for-profit medical research organization aims to help kick-start the convergence of wireless and healthcare technologies.

"When we put a person with more of a telecom bent in the room with one who has a medical device bent, it's almost as if you're having someone who speaks French and somebody who speaks Russian," says Don Casey, West Wireless Health's CEO. "People need one of two things: They have a base technology that they can't wirelessly enable, or they have a wireless technology that they're not sure how to clinically validate."

A 25-year veteran of the healthcare industry and a former executive for Johnson & Johnson, Casey was brought on in March to lead a team of nearly 60 scientists, engineers and business pros with one overarching goal: to do whatever it takes to bring new wireless health products to market that are scalable so that they can be afforded around the globe.

The engineers are helping the entrepreneurs research ways to build technologies such as wireless sensors that don't need a lot of power. Meanwhile, the scientists are helping put developed products through clinical trials. The business folks are greasing the wheels with the venture community and matching complementary companies together.

Because West Wireless is well funded, it can help businesses with a lot less strings attached than some other more traditional business partners.

The San Diego institute is well positioned near both Qualcomm and the city's thriving biotech scene. Casey says the group expects two to three spinoff companies to launch in the next year, not to mention partnerships between businesses that have connected with West Wireless. He encourages other ventures with good ideas to contact the organization.

"We want to stimulate the birth of an industry," Casey says. "Our mission is to help these products get out. If that means working on a royalty basis or an equity basis [with entrepreneurs], that's terrific. And if there's another way people want to work, we're open to that."