An unlikely alliance between a good citizen and a bike shop owner has helped more than 12,000 people get around.

By Gwen Moran September 20, 2010
This story appears in the October 2010 issue of Entrepreneur. Subscribe » 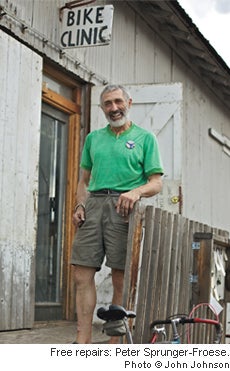 For Kay Liggett, owner of the bike shop Criterium in Colorado Springs, Colo., helping out began as mere curiosity. On her way to and from her business back in 1993, she regularly spotted a man fixing bikes on the sidewalk. Eventually she stopped to ask him what he was doing.

Peter Sprunger-Froese told Liggett he repaired bicycles for homeless and disadvantaged people at no charge. He also told her that he frequently lost tools and parts because he didn't have a place to store them and they would get stolen.

Liggett urged him to look for a low-cost space to do his work, and she even offered to contribute to his effort. Sprunger-Froese was suspicious of her motives, she says, not understanding why a bike shop owner would fund his efforts.

So, Liggett gave it to him straight: It would get the "riffraff" out of her store.

"His customers at that time were in and out of Criterium, coming in the back door, trying to get stuff and occasionally stealing things that they couldn't buy," she says. Supporting his efforts would not only help his customers get what they needed, it also would protect Criterium's merchandise.

Sprunger-Froese found a modest location (a small room) to set up The Bike Clinic. Criterium Bicycles began paying the rent and donating parts totaling $200 per month.

Criterium's efforts have helped the clinic flourish, providing refurbished bikes and repairs free to those who need them most. Sprunger-Froese's customers contribute by helping pump air into bicycle tires, haul materials to the reclamation center and "dumpster dive"--look for old bicycles and parts that have been discarded. A few other local businesses also donate parts and materials.

For Sprunger-Froese, who lives as part of a small self-sustaining community in Colorado Springs, bicycles are a necessity, not a luxury. He says his work contributes to the dignity, mobility and employability of his customers, many of whom have been incarcerated or hospitalized for mental disabilities.

Liggett and Sprunger-Froese are enthusiastic about how The Bike Clinic contributes to resource conservation. Bicycles that once would have been thrown out, adding to area landfills, are, instead, refurbished and given a new life, he says.

For Liggett, who has received some publicity through her affiliation with The Bike Clinic, the payoffs are both philanthropic and pragmatic.

"We didn't have the resources to help these people, even though they needed it. Peter's work gives us a place where they can go, it helps the environment, and it extends the life of bicycles that would be thrown away," she says. "For such a small investment, the return for us is more than worth it."