A Whale of an Idea

How one mammal spawned an entire industry
Next Article

It all started with a whale and a man named Fish.

As the story goes, Frank Fish was on vacation with his fiancée in Boston when he spotted a fine-art sculpture of a humpback whale in Quincy Market. On closer inspection, he noticed the flippers had bumps on the edges.

"I thought 'The artist got this all wrong,'" he recalls with great clarity despite the passage of almost 30 years. "But when the store manager pulled out a picture of the real deal, it had prominences, too. I was blown away."

Fish, a plain-spoken and affable biology professor at West Chester University in West Chester, Penn., had always assumed these wing-like extremities worked like other straight-edge airfoils, such as airplane wings. But then he realized that he had been wrong. And that fateful revelation changed his life forever.

Like a modern-day Ahab, Fish became obsessed with these bumps. He wanted to find out exactly how they worked in water and what their advantages were. To do this, he even went so far as to obtain a 10-foot-long humpback flipper from the New Jersey Marine Mammal Stranding Center and distributed by the Smithsonian for research purposes. He created dozens of mathematical models to prove how the bumps must reduce drag, suggesting a new approach to the science of fluid dynamics.

Then in 2004, Fish and three co-authors published their results, which later appeared in Science and Nature. The scientific community embraced them. Not long after, the articles caught the attention of Stephen Dewar, a Toronto entrepreneur and self-proclaimed physics nut, who tracked down Fish in early 2005 to learn more about the intriguing work. They discussed the commercial possibilities for applying flipper-inspired designs to boat keels, airplane wings and industrial turbines.

Later that year, they filed patents and leveraged roughly $500,000 from private investors to form WhalePower, based in Toronto. 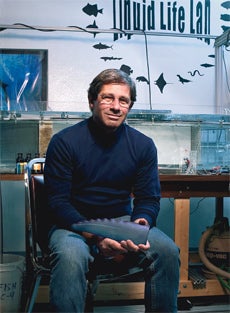 "We knew it was a huge risk at the time," Dewar says. "Considering how widespread traditional airfoils are in today's world, people weren't exactly eager to accept that there could be a better approach."

So Fish set out to develop more scientific backing. Through additional trials, he also determined that airfoils with this new design could operate as much as 13 percent more efficiently than those with edges that are flat.

Because these bumps technically are known as "tubercles," Fish dubbed the concept Tubercle Technology. This forms the basis of designs that WhalePower is licensing to manufacturers in the industrial fan industry.

The first machines--24-foot-diameter fans developed for Envira-North Systems in Seaforth, Ontario--hit the market in May 2009. According to Envira-North, these fans are 25 percent more aerodynamically efficient than their predecessors, consume 20 percent less power and create significantly less noise. And Envira-North also maintains that its customers are saving as much as 25 percent on their energy costs.

The company is privately held and is reluctant to release specific financial data. But Dewar says that WhalePower "is growing at a significant double-digit rate despite the economy." And he anticipates accelerating that growth over the next year.

WhalePower is negotiating licenses for its Tubercle Technology to manufacturers who incorporate fans into computers, servers, appliances and heating ventilation and air-conditioning units. "We expect to land several major customers in the next 12 months," Dewar adds.

Fish also envisions applying the mammalian-inspired design to blades on windmills that harvest wind energy and says it someday might revolutionize the aircraft industry, too.

"The possibilities are limitless," he says. "To think: It's been right in front of us all these years." Ahab would be proud.