Billionaire Tycoon Gives Monopoly a Run for Its Money 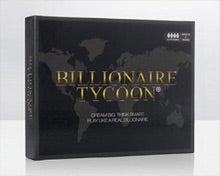 If you've been dreaming about investing in a casino in Switzerland or a cattle farm in Saudi Arabia, you're in luck. A new board game, Billionaire Tycoon, now offers you a chance to buy, sell and trade companies around the globe, and the fun of driving your friends into bankruptcy while you're at it.

Actual billionaire tycoons are probably spending their time on other activities ("The goal is to make only $1 billion?"), but we imagine nerdy business majors will get red-faced defending their faux empires even after school is out in June, when the game is released in the U.S. Can't wait? If you have the airfare (plus £34.99 for the game), you can hop the pond and buy it in Harrods in London. Or check out billionairetycoon.co.uk.

The Entrepreneur staff, always eager to reflect on riches, decided to try the game and see if we had what it takes to be masters of the universe (or at least stay out of debt). The objective is what you'd expect: Become crazy rich--specifically, be the first to amass $1 billion. The catch is that you start with only $100,000. Spend your Gs like Google in a buyout? Or hoard them in a pile under the table? Totally your call. Randomly selected business and news-flash cards (like real-life events) can help make you a tycoon or put you on the welfare rolls.

Our game started out friendly enough, with the purchase of modest businesses with our modest savings, and we engaged in a little pleasant negotiating. But once one player (let us call her B) quickly went bankrupt and tried to weasel her way out of debt with a shady deal on a Moonbucks Café, it was on! Tragedy and triumph followed: A profitable Wet N Foamy Car Wash in Australia had to be sold at half its value once the owner lost a turn (being investigated for tax fraud, natch), while a Mr. Mario's Ice Cream Van idled in Brazil, slowly garnering revenue for its proprietor.

There were near-bankruptcies left and right (just like in real life!). And as for the conniving B? She managed to strike a lucrative deal on that ice cream van--and win entrepreneur of the year. Figures.