Can I get your number? Mobile commerce makes purchasing as simple as waving your smartphone at the register.
Next Article

You know the clunky, unsightly cash register occupying all that real estate in your place of business? Say goodbye. It's now a paperweight--a fossil, a relic of a bygone era where cash and plastic reigned supreme. The future of point-of-sale transaction processing lies in the mobile phone, the one thing your customers carry with them wherever they go--the one thing they absolutely never leave home without.

Merchants have heard this prognostication before, of course. Pundits have forecasted the emergence of mobile wallets for roughly a decade. The tech sector has promised--but failed to deliver--a secure, alternative payment system that would accelerate the transaction process, increase customer spending and streamline operations. The kind of system that would be a godsend for verticals like quick-service restaurants and convenience stores. But mobile commerce always failed to take off.

This time, though, things look different. (Really.) For starters, consumers are showing far more interest in making purchases using their mobile devices. Close to half of U.S. smartphone owners have either used their devices for mobile shopping or plan to do so in the imminent future, according to a survey conducted by ABI Research. Americans spent more than $3.4 billion on mobile shopping in 2010, up from $1.9 billion the previous year, the report says--and it predicts that online shopping will yield $163 billion in worldwide sales by 2015, representing 12 percent of total global e-commerce turnover.

Credit the growth in part to exploding smartphone penetration. More subscribers than ever now carry the kind of cutting-edge devices necessary to make payments on the go.

The companies that provide mobile service are going all in on mobile commerce, too. Three of the four largest U.S. mobile operators are joining forces to launch Isis, a nationwide mobile transaction network rolling out with support from the likes of Discover Financial Services and Barclaycard US that promises to dramatically streamline the way businesses accept mobile payments. And a wave of other mobile payment options is emerging that will further simplify and secure shopping across the digital sphere.

But consumer demand for mobile commerce and investment by the mobile industry mean nothing if retailers, restaurateurs and other small business owners don't also commit to a mobile payment environment. And those businesses are poised to reap the greatest rewards. Beyond boosting transaction speed, security and convenience, mobile commerce also can create new opportunities for customer interaction--like coupons, promotional offers, appointment reminders and other incentives.

Read on to learn about the innovation that will usher your business into the m-commerce era.

In a sense, Isis is itself a startup that is helping make mobile commerce a reality for small businesses everywhere. It happens to have some heavyweight help behind it--which is why Isis has such a tremendous chance at succeeding.

Isis is a nationwide mobile commerce network spawned in late 2010 that has the potential to connect 200 million wireless subscribers across the country with merchants equipped to accept mobile payments from their customers. It can do that because Isis is backed by Verizon Wireless, AT&T and T-Mobile USA--three of the four largest U.S. mobile operators in the U.S. 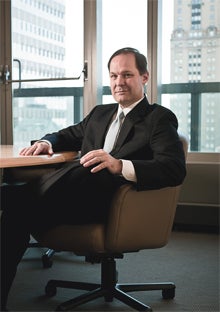 "There have been a lot of science experiments in this space, but you need scale and commitment to truly ignite innovation," says Isis CEO Michael Abbott, a financial services veteran who was chief marketing officer of GE Capital before he signed on to helm Isis. Abbott calls his company "kind of a startup, but with three huge partners."

"Merchants need to know that mobile payments are here," he says. "We're giving them the scale and commitment necessary to move forward."

The service Isis offers is simple: It will allow consumers to make purchases by swiping their microchip-equipped smartphones at corresponding reader units located at participating retailers. The process relies on something called near field communications, or NFC, which enables secure communications between two electronic devices in close proximity (about 4 inches apart).

Isis also is building out its contactless payment platform in collaboration with Discover Financial Services, whose payment network is accepted at more than 7 million merchant locations nationwide. Few startups get a better start than that.

The future of Isis hinges on building out NFC's retail footprint and mindshare. Abbott welcomes the challenge.

"I like to take raw materials to mold and create new things," says the one-time electrical engineering student at Columbia University, who dedicates his free time to woodworking. "The idea is to bring [Isis] to every phone, and to give something to consumers that simplifies their lives. For that to happen, we have to be open to all merchants, all wireless carriers and all banks. That means we need a standard everyone can use. NFC technology is nothing new--there's nothing that needs to be reinvented. [Point-of-sale] terminals and readers are already in stores."

Isis isn't the only entity backing near field communications to connect merchants and customers. Handset maker Nokia has pledged to support NFC in all new smartphone models introduced this year. And Google announced late last year that NFC integration is included in the updated version of its Android mobile operating system.

Research firm iSuppli anticipates worldwide shipments of mobile devices with built-in NFC capabilities will increase to 220.1 million units in 2014, up from 52.6 million in 2010. Perhaps most significant, contactless readers are already deployed in more than 100,000 U.S. merchant locations across the U.S.

"The consensus in all markets is that contactless payments are going to evolve over NFC," says James Anderson, vice president of mobile for MasterCard. "People believe that's the right technology."

Isis is slated to roll out consumer trials in key geographic markets this year and into 2012. Barclaycard US is expected to be the first issuer on the network, offering multiple mobile payment products.

But Abbott is already thinking far past mobile payments. In his mind, Isis will not only render cash, credit and debit cards obsolete, but also allow merchants to replace loyalty cards, coupons, event tickets and transit passes.

Big Moves For Small Payments
Don't be fooled. Just because they're called micropayments doesn't mean the revenue opportunity is insignificant.

Perhaps no company has made more real money selling virtual goods than social gaming giant Zynga, which reports that in-game digital transactions--for example, crops and livestock purchased by FarmVille players--account for roughly 90 percent of its annual revenues, a windfall of about $450 million in 2010.

Zynga's breakout success is all the more remarkable given the struggles that have long faced traditional publishers and media providers looking to monetize their content on the web. It's been a different story on mobile phones, however. The days when subscribers routinely forked over a few bucks for a 15-second monophonic ringtone are over. In the current smartphone era, half of all iPhone owners download a premium application to their device each month. Mobile subscribers consistently exhibit their willingness to make small, impulse purchases on the go--a trend buoyed by the simplicity and efficiency of charging the transaction to their monthly wireless bill.

New payment options that create viable alternatives to traditional cash and credit transactions will make mobile micropayments even easier. In late October, AT&T launched a mobile payment trial enabling its 93 million U.S. subscribers to charge music, movies and virtual goods directly to their monthly bill by entering their mobile number instead of their credit card or PayPal account information. AT&T rolled out the program in partnership with no fewer than three rival mobile payment solutions startups: BilltoMobile, Boku and Zong.

"Isis is not just about putting mobile payment services on your phone, but delivering one simple, integrated solution that brings all your paper and plastic together," he says. "We can create value in a lot of ways. For example, when you leave a store, a merchant can send a promotional offer to your phone, and it's sitting there the next time you come back. It's going to be a lot of hard work, but we have the scale and the support to finally catalyze the market."

"Mobile payments enable you to reach a segment you can't reach with credit cards and PayPal," says Ron Hirson, Boku co-founder and senior vice president of marketing and business development. "Customers don't always know their credit card information, but with Boku, you only have to enter your 10-digit mobile number. Mobile also allows you to reach people who can't pay any other way, especially in emerging markets. Now merchants can sell to people they couldn't before."

How many more people? Consider that there are roughly 177 million credit card holders in the U.S., compared with about 293 million wireless subscribers nationwide, or roughly 93 percent of the total American population. With international wireless subscribers surpassing the 5 billion milestone in late 2010, it's no surprise that the global mobile payments market--including purchases of digital and physical goods as well as money transfers and point-of-sale transactions--is expected to explode from $170 billion in 2010 to almost $630 billion in 2014, according to Juniper Research.

That growth depends on a solution that makes sense for consumers, mobile providers and merchants alike. Although the AT&T trial will go far in separating the contenders from the pretenders, on paper BilltoMobile, Boku and Zong offer similar solutions.

BilltoMobile inked a deal with Verizon Wireless last March (between that and the AT&T partnership, the startup now has access to 65 percent of U.S. wireless subscribers). BilltoMobile's Direct Mobile Billing service offers a secure two-step payment process requiring only seconds to complete: To make an online buy, consumers select BilltoMobile as their payment option, choose their wireless carrier and enter their mobile number and ZIP code. BilltoMobile transmits a pass code via text message, and once the code is successfully entered in the transaction window, the purchase is complete.

Zong's international operator partners include T-Mobile, Vodafone, Orange and O2. The firm is also the mobile payments provider for Facebook Credits and other social gaming and digital platforms. Like BilltoMobile, its solution incorporates a PIN code to authenticate a transaction.

"The most important thing to a consumer is convenience," says David Marcus, Zong founder and CEO. "That's why we're focused on mobile--there's an enormous opportunity to increase convenience."

Boku--which boasts partnerships with 220 mobile providers in more than 60 countries--tweaks the formula: Instead of a code, consumers reply with a "Y" for "Yes" in response to its text-based purchase authorization. "What we're doing doesn't require consumers to upgrade their phone," Hirson says. "We reach everyone on the web."

AT&T's commitment to nurturing mobile micropayment options extends beyond marketing the BilltoMobile, Boku and Zong services. In conjunction with the partnership, the operator also agreed to reduce its cut of transaction revenues. In the past, carriers often claimed between 40 percent and 50 percent of digital media sales billed on their networks; terms of the AT&T deal are unknown (the company declined an interview request) but are said to be substantially more favorable to its technology partners and merchants. (BilltoMobile, Boku and Zong all take a small transaction fee on each purchase as well.)

The growth of mobile micropayments depends on everyone in the value chain continuing to work together, BilltoMobile's Greenwell says. After all, everyone stands to gain.

"For now the focus is on digital goods, and from there it will move to nondigital goods. Eventually, mobile will evolve as a second-nature payment mechanism for all transactions under $100," he says. "There's nothing magical about this. It's a simple model that benefits everyone. It's beautiful in its simplicity."