When Whiffling is Good Business

America's mighty appetite for leisure has elevated the back-room game of poker to a booming global industry, the college party pastime of beer pong to a thriving commercial enterprise and the schoolyard kickball contest into a national phenomenon. Two boyhood friends believe that appetite can do the same for their longtime passion: Wiffle ball.

Nick Benas and Jared Verrillo grew up in Guilford, Conn., not far from the factory where Wiffle balls and bats are made. As kids on a makeshift field, they hatched what would become Big League Wiffle Ball. School and a stint in the Marines put that idea on hold until January 2007.

Four years later, their venture has a devoted legion of some 50,000 players in leagues and tournaments that are spreading beyond the organization's New England roots and into the Midwest, Southeast and elsewhere. Along the way, BLWB has amassed media coverage from Fox's This Week in Baseball, CNBC's The Big Idea with Donny Deutsch and ESPN, along with support from big names such as former Major League Baseball pitcher Jim Bouton.

Now Benas and Verrillo are intent on scaling up BLWB to national and international play, including countries like Japan and South Korea, where baseball's popularity might provide a foothold.

So far, the BLWB "co-commissioners"--Benas, who works his end of the partnership from Los Angeles, and Verrillo, who's based on the East Coast--have been self-funding the venture, supplemented by local sponsorship dollars. To reach the leisure industry big leagues, they're eyeing major corporate sponsorships, private equity funding, sports agent representation and even TV coverage.

While firm commitments have yet to materialize on any of those fronts, Benas says, "We're getting in front of some very interesting people. A lot of exciting things are happening." 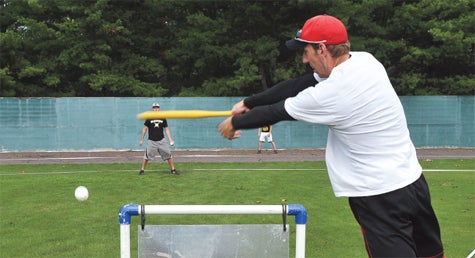 Be Relentless
Like baseball, Wiffle ball centers on a pitcher hurling a ball to a batter--albeit a plastic ball and bat rather than leather and wood ones. Wiffle ball doesn't require mitts or helmets, but don't dismiss the game as T-ball for grown-ups. In the hands of an adept hurler, the Wiffle ball darts, dives and flutters like a knuckle ball Bouton might have thrown in his playing days, although BLWB rules limit pitches to 35 mph.

Two strikes and you're out; five balls net a walk. Hits are determined by where the batted ball lands on the field. Games last five innings. Those rules, Benas and Verrillo say, make Wiffle ball appealing and accessible to the masses.

"I think they have a nice opportunity here with [BLWB]," says Bouton, who should know: Besides creating the popular Big League Chew, Bouton founded the Vintage Base Ball Federation, a baseball league that plays with 1860-era rules and equipment.

Bouton says he relishes the role of mentor to Benas and Verrillo. The gist of his advice to them: "Be relentless. That's number one, and maybe that's number two, also. Don't get discouraged. And take your idea to the top--to the CEO or the top person in marketing. Don't settle for talking just to the R&D people."

Benas and Verrillo have been busy following Bouton's advice as they seek sponsors, investors and a major media platform to help bring the game they love to the mainstream. But as busy as they are, they still find time to keep their own Wiffle ball skills sharp.

"We always carry a strike zone in the car with us," Verrillo says, "so we can pop it out and set it up wherever we are, just to get a quick game in."