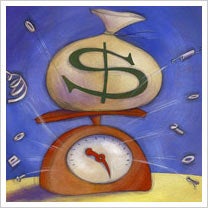 Upwards of $1 trillion. That's what kind of commitment the Treasury Department is making with its plan to buy up the bad mortgage loans that are throttling the U.S. economy. The bailout plan as written calls for $700 billion, but no one really knows how much the questionable loans add up to, so it could reach $1 trillion. A trillion. That's a one with 12 zeros after it.

Numbers like that don't even make sense to the average American consumer. How can someone earning $100,000 put that into perspective? Well, if you saved $100,000 per year without benefit of earning interest, you'd have to save for 10 million years to be a trillionaire. What are some other ways to think about a trillion? Well, try these on for size:

If you're reading this, chances are you'll never be faced with any sort of economic indicator that reaches beyond the trillions, but in case you're interested, the number after 999,999,999,999,999 is 1 quadrillion--15 zeros and a whole lot of people wondering who makes this stuff up.