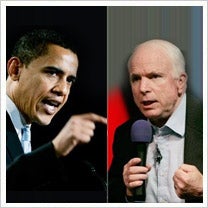 "And if you imagine just one company trying to deal with that," he said, "now imagine a million companies all across the country. So it could end up having an adverse effect on everybody, and that's why we had to take action. But we shouldn't have been there in the first place."

Later in the debate, Republican Sen. John McCain accused Obama of offering a tax plan that would weigh heavily on those very business owners. He was referring to the Democrat's plan to increase taxes on American individuals earning more than $200,000 a year, and on households taking in more than $250,000.

"Sen. Obama's secret that you don't know is that his tax increases will increase taxes on 50 percent of small business revenue," McCain said. "Small businesses across America will have to cut jobs and will have their taxes increase and won't be able to hire because of Sen. Obama's tax policies."

He added that Obama's policies will result in "mandates and fines for small businesses."

He added that he's proposing tax credits that would allow entrepreneurs to afford insurance for their work forces.

McCain continued to attack Obama on business, accusing the senator from Illinois of proposing an insurance plan that will levy fines on entrepreneurs who refuse to insure their employees. "If you're a small business person and you don't insure your employees, Sen. Obama will fine you," McCain said. "Will fine you. That's remarkable."

Obama tried to clarify his intentions. "Small businesses are not going to have a mandate," he said.

The dueling stances toward Main Street business owners was also a contentious issue during the vice presidential debate last week, when Republican Gov. Sarah Palin also accused the Obama ticket of proposing tax hikes on "millions of small businesses." The notion, however, was largely debunked by FactCheck.org, which states that Obama's plan would leave the "overwhelming majority" of small-business owners without tax increases.