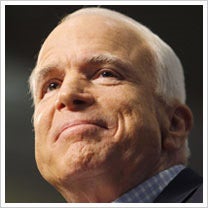 The Republican hopeful again invoked the symbolism of Joe "the Plumber" Wurzelbacher, an Ohio man who last week confronted Obama about his plan to increase taxes on those top 3 percent or so of Americans who earn more than $250,000 annually. Wurzelbacher, who reportedly does not have a required license to be a plumber in his hometown, said the Democrat's plan would prevent him from buying the business where he works because its annual profits exceed $250,000 and would trigger what he argues would be oppressive taxes.

"He wants to spread the wealth around, my friends," McCain said of Obama at a rally Sunday. "The attack on Joe the Plumber is an attack on small business all over this country."