Not Your Average Smashing Success Story 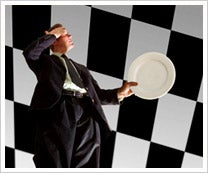 Everything we need to know about the cathartic effects of smashing something, we learned from "Office Space." But in most cases--evil printers notwithstanding--we're forced to pay for that split second of catharsis with the regret of having destroyed something that is valuable and/or makes a mess.

Enter Sarah Lavely, 38, a retired veterinarian who, during what she calls "a rough time in her life," thought about how much better she might feel if she could just go in a room and break something. A little more than two years later, Sarah's Smash Shack was born.

The San Diego-based business offers customers the chance to buy various glass items and, safely dressed in protective clothing and eyewear, smash the bejeezus out of those items in one of several rooms. On the surface, it might appear that Lavely's tapped into people's need to vent. But she insists most of her clients just enjoy breaking stuff.

Broken pieces are donated to local artists, art therapy progarms and schools. Customers can also bring in their own items and then break them at Sarah's for a small "corking fee." She's seen everything from a bathroom sink ("That's between them and their driveway and a sledgehammer") to a tiny glass frog ("Froggy had bad juju, so we respected their right to send him back to the good karma world."). But make no mistake: This is not just a flash in the pan. Lavely says her revenue doubled from August to September and is looking to double again for this month. And she's more than confident that she'll enjoy lasting success, largely because of the deeper meaning she's instilled in the business for herself and for her clients.

"What goes on in here, a lot of people don't get it--stories being exchanged, bonding, just people realizing that they can relate to you. And I'm one of them."