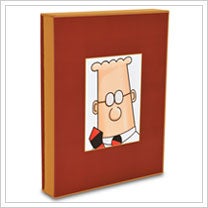 Happy Birthday, Dilbert. Put 20 candles on the cake and sing a refrain of the world's most sung song to the character who feels the angst of every cubicle-bound employee and represents the dashed hopes of so many dreamers. (How he would blow out the candles is beyond me. Dude's got no mouth.)

The ubiquitous workplace presence, creation of multiple-low-paying-job-holder and current entrepreneur Scott Adams, has said and done many of the things workers around the world only wish they could say and do. And for most of that time he's been trapped in the same cubicle.

To mark the occasion of Dilbert's 20th--he doesn't look a day over however old he was when the strip began--United Features Syndicate Inc. and Andrews McMeel Publishing have created a hefty collection of Adams' ode to workers everywhere--though oddly enough Dilbert didn't start out as a workplace comic.

At 576 pages, "Dilbert 2.0: 20 Years of Dilbert" doesn't include every Dilbert comic, but what it lacks in completeness it more than makes up for in weight. The DVD included with the book, however, does contain every comic from Dilbert's April 16, 1989, debut through April 2008.

Adams makes the book a compelling read by sprinkling his comments throughout. He points out the first appearance of this or that character; he riffs on his lack of drawing prowess; he highlights a joke that fell flat; he explains how using a sentence from a memo at his real job in one of his early strips earned him worse and worse assignments at work--and how his comic strips got funnier as a result.

One of my favorites, about a March 30, 2006, strip: "This was the first successful use of the word "crap" in a Dilbert comic. It was a long, hard struggle, and perhaps not the worthiest goal, but success feels good no matter where you find it."

Adams himself has moved from worker drone to the role of entrepreneur. He owns two restaurants, one of which he actively manages. I wonder if he has become the pointy-haired boss in any of his employees' eyes.

After 20 years, one might think he'd be out of ideas for the strip, but as long as there are meetings, coworkers, consultants (and consulting fees), bosses, technology, accounting departments, office policies, new guys and human resources, Adams will have material.