Is Bailout Money for Nothing? 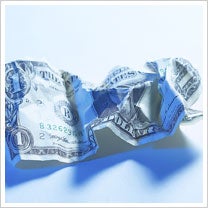 The federal windfall for financial institutions--$250 billion in loans to date, aimed at loosening up credit lines and getting the economy moving again--probably isn't helping out the average entrepreneur.

That's because, as recent reports reveal, some major banks are using billions in federally secured funds to help them purchase smaller banks and to give executives millions in bonus pay. PNC Financial Services Group this month took over the failing National City bank with  $7.7 billion in taxpayer money. And so representatives from both sides of the aisle in Congress are urging U.S. Treasury Secretary Henry Paulson to tighten his reins on the public funds to ensure that the money is used to loosen up consumer and small-business credit lines--as Congress intended.

"Funds made available under the economic rescue package should not be used to pay for bank acquisitions, raises and executive bonuses," house Republican leader John Boehner wrote in a letter to Paulson.

Meanwhile a New York Times editorial today decried the bank bailout--part of the $700 billion Wall Street rescue package--arguing that strings should be attached to any federal funds tapped by financial institutions: "If Treasury won't impose conditions, Congress must, including a requirement that banks accepting bailout money increase their loans to creditworthy borrowers and limit their acquisitions to failing banks ... "

"An even bigger problem is that the bailout was sold as a way to spur loans. If that never was--or no longer is--the primary aim, Congress and the public need to know that. Lawmakers should not release the second installment--$350 billion--until they have answers and guarantees that the bailout money will be spent in ways that put the public interest first."