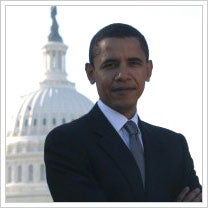 In his half-hour infomercial, which aired last night on three major television networks, presidential hopeful Barack Obama proposed "a rescue plan for the middle class" that would include credit lines for entrepreneurs blindsided by the economic crisis.


The Illinois Democrat also vowed to shift tax rules so that employers who hire Americans are rewarded while those that use overseas workforces are discouraged. He would "give businesses a tax credit for every new employee that they hire right here in the U.S. and eliminate tax breaks for companies that ship jobs overseas," Obama said.

"Barack has looked at the small business side of the American economy, and says, 'Look, that's where most innovation and entrepreneurship is, let's give them the rocket fuel to really accelerate, rather than giving tax cuts to the Exxon Mobils or big oil companies that need not one ounce of help from government to be very, very successful.'"

The focus on small business isn't surprising. McCain and vice presidential running mate Sarah Palin have been hammering the Obama-Joe Biden ticket on its business stance, with Palin having accused the Democrats of proposing to raise taxes on "millions of small businesses." The Republican ticket refers often to Joe "the Plumber" Wurzelbacher, an Ohio handyman who has claimed that Obama's tax plan would throw a wrench in his plans to buy the business he works for because its profits would place it under Obama's proposed increase.

The Republican camp has criticized Obama's tax plan for introducing what they argue is a socialistic mechanism of spreading America's wealth instead of letting middle- and high-income earners keep more of their money.

McCain yesterday compared Obama's paid advertisement to infomercials that peddle needless gadgets, saying, "As with other infomercials, he's got a few things he wants to sell you," including "an automatic wealth spreader that folds neatly and fits under any bed."