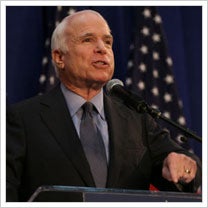 Sen. John McCain hammered Sen. Barack Obama on small business over the weekend, solidifying his campaign focus on entrepreneurial taxes and contentions that his Democratic opponent would be bad for the average American proprietor.

McCain's last-minute attacks came as the Republican trailed Obama by 11 points among likely voters on the eve of the election, according to the Gallup organization. The Arizona senator tried to highlight the differences between himself and Obama during a campaign swing through Florida.
"We're talking to small business people all over the state of Florida and all over America and we've got to restore their hopes and dreams for America because that's the basis of our economy," McCain said after meeting with Latino entrepreneurs in Orlando. "My commitment to the small-business owners here is I will not feel the need to 'spread their wealth around.' I want them to keep their wealth and create jobs."

McCain has repeatedly criticized Obama for saying that the country should "spread the wealth around" when it comes to taxes, a phrase the Democrat used when responding to the concerns of Joe "the Plumber" Wurzelbacher at a campaign rally a few weeks ago.

Obama wants to increase tax on the top 5 percent or so of top income earners in the United States, a bracket that would include some small-business owners. McCain has used Wurzelbacher as an example of those folks who would be weighed down by the new tax structure. The handyman claims that Obama's plan will prevent him from buying his own busness.

But Obama's camp has maintained that its tax plan will actually reduce taxes on the lower 95 percent of American income earners, a bracket that includes a majority of small-business owners. On Sunday, Obama reiterated that his plan will benefit the middle class.

"... In two days you can choose policies that invest in our middle class and create new jobs and grow this economy, so that everybody has a chance to succeed--from the CEO to the secretary and the janitor," he said.