This Industry Has Gone to the Dogs...and Cats 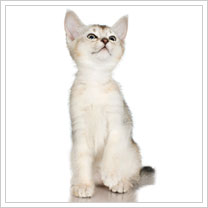 I can no longer lie and say that I understand the pet industry. I can't. It's too hard.

There are so many things in life that I can't quite comprehend: yogurt as a trend, paying over $100 for dirty jeans, how Amy Winehouse is still alive, why Peter Cook cheated on Christie Brinkley and now...the pet industry altogether.

They've finally made a board game for cats.

Last month, Darf Inc. released Catfeats, along with three other pet products. Darf founder Denise Rothman wondered if cats were considered lazy because "we don't focus on them enough" and thought that there might be others out there looking to improve their cat's behavior. So she made Catfeats, a board game for cats and their owners.

And for good reason: to make cats more obedient and fun.

Good. Because for years, I haven't really understood cats. They lie around, they cost you money, they leave whenever they want and you still have to beg for their love. It's like dating someone who thinks she's better than you. Now, if they started playing Risk and Scrabble, I could see the value in having a cat hanging out in my living room, maybe asking me about my day.

However, I suppose that Catfeats will have to do...for now.

And, apparently, Rothman has heard the whole "cats are lazy" speech before. "My husband said, 'You can't do that with cats,'" recalls Rothman, who found online videos of cat tricks to prove to her husband that she could. Rothman's 18-year-old cat can shake hands, so there may actually be some hope for cats with this board game.

How to play Catfeats: You roll a paw print dice, pick a matching paw print card, get your cat to do the activity, enter your score and the first player to score 30 wins. Any combination of 1-4 people and 1-4 cats can play.

Rothman, 56, founded the company in 2006 while working as a marketing and design manager at a high tech company. She spent 2006 and early 2007 developing her ideas. She quit her job and used her stock options to start Darf, and in September 2007, she released Funagle and Do You Mind?, two board games for owners to play with their dogs.

"I sent out a press release [for Funagle] and ended up with over 100 articles written, TV features and radio shows about the game. That drove a lot of buyers to our website," recalls Rothman. "I also sent out direct mail pieces to target retaillers."

Rothman then went bigger. "We went to the Nationa Pet Trade Show this October and made connections with some manufacturer's representatives," says Rothman. "We have a distributor in Belgium and are in the process of establishing one in Australia."

Now, even though most of Darf's products are dog-oriented, it's the cat board game that gets me. Dogs just seem to be better about manners. And cats...not so much, in my experience. When I was a teenager, I was trying to hold my cousin's cat, but it scratched my face and jumped out a window. The family dog licked my wounds, nursing me back to health. So, I admit there may be a bias here.

But the point remains: a fun way to make cats more obedient seems like an industry in itself.

Rothman says that she can train her cats to be obedient, as she and her board game uses the theory of Pavlov's Dog (association of rewards for behavior). "[I] previously was taught to jerk dogs around with the leash and then say 'good dog' when the dog did the task right," says Rothman. "But, in my new classes, we were taught to gesture, name a trick and use treats to get the dogs to perform the tasks. In other words, we set the dog up for doing something right and rewarded them."

In fact, Rothman has already trained her two cats, Paisley and Oprah, to be more obedient just using turkey jerky and tuna oil. If cats can be trained to be obedient through games, then there has to be other entrepreneurial opportunities involving cats that may have been overlooked.

Dogs may have been hogging the pet industry and Darf may have something here.

And, if you haven't heard of Darf's board games, then you maybe haven't been shopping at places like Bark, Bath & Beyond, Pet Fancy, Wag This Way and Pettysburg.

OK, yes, I made that last one up. Pettysburg doesn't exist...yet.

But maybe it's time for me to reconsider the pet industry.

Sixty-three percent of U.S. households own a pet, which equates to 71.1 million homes, according to the American Pet Products Association. And, according to the APPA's National Pet Owners Survey, Americans will spend an estimated total of $43.4 billion on their pets.

For more information on Darf, go to www.darfinc.com. Meanwhile, other ideas of how to break into the pet industry can be found here.

Rothman expects big sales for Darf at Christmas, around the time that I'll start seeing dogs in Santa costumes and begin rethinking this whole damn industry all over again.