How Not to Cry Hardship 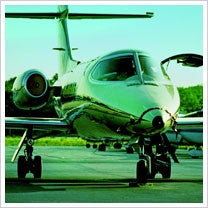 Congressman: "Mr. Auto Company CEO, are you OK? You look a little uncomfortable."

Mr. Auto Company CEO: "I am a little uncomfortable, Mr. Congressman. Thank you for asking. My back is bothering me something fierce. The automatic lumbar support mechanism on the private jet's butter-soft leather seats was broken on the flight here. And my massage therapist had a conflicting engagement. Couldn't make the trip."

Congressman: "You flew here on a private jet?"

Congressman: "You all flew here together. That's nice."

Mr. Auto Company CEO: "Actually, we all brought our own private jets."

Congressman: "You all flew here on your companies' private jets...to ask us...to ask the American people...for billions of dollars because...your companies are in danger...of failing."

OK, so that's not how the Big Three automakers' testimony went, but it might as well have. They showed up in Washington this week to ask lawmakers for a desperately needed industry loan--bailout, if you prefer--to keep the American auto industry afloat, and they arrived on separate private jets. They couldn't even jetpool. In a climate where perception is reality, these executives created a perception that didn't match the reality they were pitching.

The automaker CEOs are asking their workers to make sacrifices to help the company. They should be prepared to do the same. Were Expedia and Orbitz out of order the day they needed to book their travel? Could William Shatner not negotiate them a better deal?

Did these executives learn nothing from the outrage that accompanied AIG's post-bailout retreats? Well, they may be on their way. GM has already announced it plans to return two of its leased jets.

Business owners of the U.S., take heed. Don't announce the cancellation of the company holiday party while wearing a brand new Rolex. Don't lower the gas mileage allowance on the same day you announce you'll be on the next Russian space flight for the bargain basement price of $20 million. Don't... Well, you get the idea.