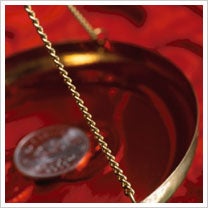 For the most part, the wealthy enjoy a different lifestyle than the rest of us, but even they know to practice caution in the face of an economic downturn.

Take, for example, these thrifty tales from a Time Magazine story on "Recession and the Rich", written during the 1974-75 recession:
The "very rich," the article states, "are trimming their lifestyles, cutting back on conspicuous expenditure ... and, often for the first time, drawing up family budgets."

Decades later, the rich are cutting back again. But this time, some will also be cutting back on the costs of their love affairs.

Prince & Associates Inc., a market research firm specializing in global private wealth, recently released survey results showing that the vast majority of millionaires don't plan on being quite as generous to their mistresses in a depressed economic environment.

Of the 518 millionaires surveyed--all were married and the primary wealth holder in the family, had a net worth of at least $20 million, and owned a private jet--191 individuals (two-thirds men, one-third women) admitted they had lovers on the side. A full 12 percent confessed they would drop their lovers completely for financial reasons.

In addition, men proved to be stingier, with more than 80 percent planning to lower their mistresses' allowances and give them cheaper gifts, and 75 percent expecting to eliminate jet rides, resort vacations and nice apartments. On the other hand, more than half of the women respondents actually planned on raising their gigolos' allowances, and only 20 percent divulged they would lower the amount of gifts and perks.

According to the Globe and Mail, Prince & Associates President Russ Prince concluded, "I'm finding it's much better to be kept by women than men."

Based on these statistics, it would be hard to argue otherwise.