Year in Review 2008: Flameouts and Bailouts 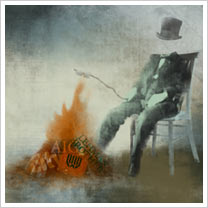 You don't need me or anyone else to tell you it's been a rough year in the business and financial worlds. But when it gets this bad, you can laugh or you can cry. In this case, you'll probably do a little of both. Here's our list of 2008's lovable (and not-so-lovable) losers.

Of course, none of this would be possible without our high-rolling friends in the financial world. Our precious 2008 will be forever known as the year the markets went to hell, but it all started in 2007 with the first blushes of the subprime mortgage crisis, and the dominoes have been falling ever since.

The biggest casualty on Wall Street was Lehman Brothers, which became the largest investment bank failure in almost 20 years--since Drexel Burnham Lambert--when it filed for bankruptcy in September. Lehman, which had been in business since 1850, was carrying $3.9 billion in losses when it went under, but may have paved the way--for good or ill--for the series of bailouts that was to follow. The bank's failure also paved the way for someone to knock CEO Richard Fuld out cold in the company's gym. Golden ice pack, anyone?

The most notorious name in the Wall Street collapse has to be AIG, the insurance giant that received more than $150 billion in total bailout money. But even more than the money itself, AIG found itself on the wrong end of public opinion because of what it did with the money. Just a week after receiving its initial $85 billion bailout, AIG treated its top earners to a $440,000 California retreat. Then in November, after the U.S. Treasury agreed to buy $40 billion in new AIG stock, the company retreated again, this time to Phoenix, and to the tune of $343,000. In fact, by the end of October, AIG had already drawn on $90 billion of what at that time was $123 billion in federal bailout money.

In the banking world, the biggest loser was Washington Mutual, whose seizure and subsequent bankruptcy in September constituted the largest bank failure in American financial history. The seizure completely wiped out shareholders, whose shares nosedived to 16 cents after reaching $45 during 2007. All the while, Alan Fishman received $19 million for 17 days of work as the bank's final CEO, including $11 million in severance pay. Whoo hoo!

When financial behemoths can't even get credit, chances are consumers can't either. And either way, they just didn't have as much money to spend this year. With so little money to go around, the retail market suddenly wasn't big enough even from some of the heaviest hitters in the shopping game.

Two of the most successful and recognizable names to go down this year most likely went down for similar reasons. Circuit City closed 155 stores and cut 17 percent of its work force before eventually filing for bankruptcy in November. The electronics giant lost $320 million in 2007, and with spending down this year, presumably couldn't compete with the more popular Best Buy.

Linens 'N Things faced a similar uphill battle with Bed Bath and Beyond and closed 120 stores before filing for bankruptcy in May. The home furnishing outlet will cease all operations on December 28.

Although it might not have been quite as big or popular at the time of its closing, the most complete retail collapse of the year was by Mervyn's, which was the only major company to file Chapter 7 bankruptcy and completely liquidate its assets.

What would a retrospective of this year's financial ruin be without the farce that was the American auto industry? Three companies with nearly 300 years of operation between them, and the CEO of one of them stands before Congress with a straight face and says, "There is no Plan B." In an effort to really stoke the public's ire, all three CEOs flew to Washington to beg for bailout money separately in private jets. But beyond the sound bites and the overblown transgressions, there are the real failures.

For Ford, that means $29 billion in estimated losses for 2008. For General Motors, it's $27 billion. And while Chrysler only lost $21 billion, the company is shutting down all 30 of its U.S. factories for an entire month. In addition, parent company Daimler has valued all of its Chrysler stock at zero in anticipation of a possible takeover. Both Chrysler and GM have discussed options for bankruptcy and have said they would likely not survive through next year. None of this was enough to convince Congress, whose questions about bloated executive salaries and surreal labor expenses seemingly fell on deaf (if not dumb) ears. But the White House swooped in at the last second, keeping with its eight-year record of doing the same thing over and over and expecting a different result by providing the Big Three with $13.4 billion.

Certainly, the credit crunch and rollercoaster oil prices played a part in the continuing decline of the American auto industry. But for the most part, the Big Three have been victims of their own stubbornness. And it's not about rushing to build electric or even hybrid cars. It's about being strong enough to tell their American customers "no" when it comes to gas-guzzling SUVs. Maybe they could take a cue from the hometown Lions. Sure, they're 0-15, but at least they're trying.