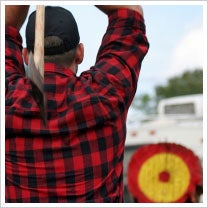 What do a mathematician and a lumberjack have in common? Other than being on the same list of ranked jobs for 2009, not much.

Job portal CareerCast.com wanted to know what the best and worst jobs are (though after today's job report every job looks pretty good). So the editors there compiled a set of criteria, fed 200 jobs into the formula and ranked them from top to bottom. Their findings may surprise you.

Topping the list is mathematician. Second and third are actuary and statistician, respectively. Apparently, boredom factored heavily into the equation--as a positive. Biologist, software engineer, computer systems analyst, historian, sociologist, industrial designer and accountant round out the top 10.

Interesting that six of the top 10 could have a hand in designing, hosting, analyzing and tabulating the results of, oh, I don't know, a survey.

Anyway, coming in dead last on the list is lumberjack. The rest of the bottom 10:

9. Roustabout (I thought that was just something parents called lazy twentysomethings.)

CareerCast.com used criteria such as environment, income, employment outlook, physical demands, security and stress to arrive at its ranking. One has to think that if theme song had been included, Monty Python's paean to the mighty lumberjack might have lifted the profession far up on the list.

Who ever heard of a theme song for mathematicians? Not bloody likely.

Start 2022 With a SWOT Analysis