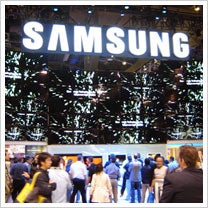 Although my energy level was at the lowest of lows on Saturday, the fourth day of CES was the most exciting for me. And no, it wasn't because of the cutie I met at the Netgear booth or because I treated myself to an amazing Ben & Jerry's ice cream cone or because I saw Stevie Wonder at the Venetian's elevators. It was because I spent my day venturing the Central Hall, the flashiest of flashy, with all the giants in consumer electronics.

From LG and Sharp to Samsung and Panasonic, the floor looked like a competition for the biggest, flashiest booth. And of course, the companies with the most money topped the chart. In my rating, Samsung won by far, with its artsy hanging TV display, complete with choreographed images and music; a wall of plasmas as far as the eye could see; and a digital, touchscreen Coca-Cola machine on display, which had attracted a line of thirsty attendees. I would imagine heaven looking a lot like the Samsung booth--the bright white lighting and spongy, carpeted flooring probably contributed to that quite a bit.

Coming in a not-even-close second and third were Panasonic and Sony. They both had huge, amazing booths, but not heaven-like by any means.

Taking in the sights at these booths got me thinking about something an entrepreneur said to me earlier in the day. I stopped by Skullcandy's booth (which also boasts a pretty significant size) to say hi to founder Rick Alden, who we wrote about in November's issue of Entrepreneur. As someone who's grown both his company and his presence at CES, he told me companies are charged for the weight of their booths. Before companies can set up shop, they must weigh their trucks before and after unloading their booth materials (e.g., carpeting, products, walls). Based on how much the materials weigh, the companies are charged a fee. This was something I did not know--and something all you entrepreneurs should consider before exhibiting at a tradeshow--that left me analyzing every booth throughout the rest of the day.

I wonder how much it cost Samsung to recreate heaven?