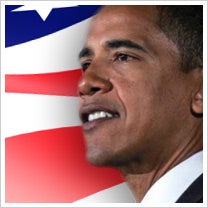 Barack Obama, sworn in today as the 44th president of the United States of America, praised the nation's heritage of entrepreneurship, labor and charity, and reminded his countrymen that they have a history of not backing down in the face of economic adversity.

"It has been the risk-takers, the doers, the makers of things--some celebrated, but more often men and women obscure in their labor--who have carried us up the long, rugged path toward prosperity and freedom," Obama said in his inaugural speech at the National Mall in Washington, D.C. He offered encouraging words for American business, but warned that economic recovery wouldn't be easy.

"Starting today, we must pick ourselves up, dust ourselves off and begin again the work of remaking America," Obama said. " ... The state of the economy calls for action, bold and swift, and we will act--not only to create new jobs, but to lay a new foundation for growth."

Obama reinforced the widespread view that his administration would support the burgeoning green-tech industries. "We will harness the sun and the winds and the soil to fuel our cars and run our factories," he said.

And he tried to lay to rest any notion that he's not a fervent capitalist who encourages a market-driven economy. The market's "power to generate wealth and expand freedom is unmatched ... ," he said.

"The success of our economy has always depended not just on the size of our gross domestic product," he said, "but on the reach of our prosperity; on our ability to extend opportunity to every willing heart--not out of charity, but because it is the surest route to our common good."

Finally, Obama warned there would be tough times ahead, but indicated that the country will survive and thrive.

"In this winter of our hardship ... with hope and virtue, let us brave once more the icy currents and endure what storms may come," he said. "Let it be said by our children's children that when we were tested, we refused to let this journey end ..."