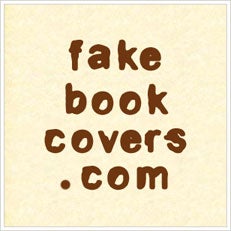 Everyone has down time at a desk job. And you can't always build a fort out of your cubicle, as it's a little obvious to your co-workers (believe me, I've tried). So, you end up finding alternate ways to entertain yourself.

Some spend their down time aimlessly Googling their own name. Others play online Scrabble. A few run their own small website or blog.

I, however, do all three.

The last one of the three is the only one that generates revenue though. You see, last October, I discovered Photoshop on my computer. Needless to say, I didn't do very much work for two weeks. All I did was make fake book covers.

Turning the hobby into an addiction and turning that addiction into a legitimate operation, I became the proud owner of www.fakebookcovers.com, where I now also write fake excerpts and sleeves.

In November, I decided that Fake Book Covers could make a delightful training project for a lackluster business star such as myself. I would use Fake Book Covers as a way of dissecting the pros and cons of different online advertising venues. And I wrote an entry proposing my plan to online readers accordingly.

Weeks later, I signed up for Twitter for my first update. I scored the name "FakeBookCovers" and learned what Twitter was about. I evaluated how it works for small businesses, new companies, CEOs, etc. You can still follow me on there. This inane project is ongoing. I wrote an entry about it.

Most recently, however, I attempted to figure out advertising with Facebook.

But before I cracked the official Facebook Advertising, I thought I'd give it a go at advertising on Facebook, meaning something small that involved a handful of my friends. Just to see if social networking can be social advertising: something casual with formal results.

So, during the last week of November, I posted a note on Facebook asking all of my friends to change their status updates to something in reference to www.fakebookcovers.com on December 1. I would remind friends about the coming campaign.

The average view count for the month of November was 50, and the highest view count I ever had before was 115.

Though December 1 still remains my highest day, I saw some good fallout. The next day was 227. The day after that was 129. Finishing out the week, the numbers were smaller, but usually still larger than my previous average (day counts like 49, 53, 86). A week later, I had a random day of 216 and another one at 196. The numbers were good. But more importantly, they were better than what I had.

My friends promoted my product and some of their friends stayed on as frequent visitors. All you really need is one good visit to turn a friend's friend into a regular.

And that's what social advertising can offer: a reassurance. Advertising is blank space. Quite often, advertisements run as parodies of themselves; cold and white vs. flashy and obnoxious. Big money ads are just a blank stare of empty eyes with a mouth moving and the words coming out in wrong time. Sometimes, billboards can read like 1984 propaganda.

But what will actually convince you to go see a new movie: a big poster and tagline or your friend suggesting you go see it?

Social advertising is word-of-mouth with your fingers. Instead of fliers and promotions, which may cost some money, ask your friends to play their keyboard like a piano. Let them get the word out. It hardly takes any effort. It honestly takes less than a minute. And if your friends aren't willing to help your business out with just a minute of their time at a computer, then...well, delete 'em.

I mean, social networking sites don't have to be some faux-website, a cooler and hipper version of whatever you really have. Social networking sites are the new grassroots. If you mobilize your friends as well as your "friends," you could see some new people on your website. It's like pyramid advertising and you want your campaign to look like Giza.

As the good trail following December 1 started to slow, I decided it was time to take on Facebook Advertising.

Halfway through December, I bought $10 worth of a day's ad time on Facebook to run along the right-hand side.

Or let's say I bought a day's worth on purpose, as I bought 29 accidentally.

That's right. I somehow missed the end date option of my advertising. I wanted to purchase $10 of ads for the day, just to see if my numbers would skyrocket, and I ended up spending $300.

I didn't realize this gigantic error until I read my credit card statement in January. Every three days, there was a roughly $30 bill from Facebook Advertising for the month. I don't check my personal e-mail that often, so I missed some messages from Facebook.

Yes, I accidentally spent $300 on a website that has only generated $19 worth of revenue to date.

However, I contacted Facebook Advertising, letting them know that I'm new to online advertising and that I was only trying to buy a day's worth for an article and that sometimes I do things without thinking (like putting a fork in a toaster as a college junior).

Pam of Online Sales Operations at Facebook Advertising e-mailed me, asking questions such as, "When you created a daily budget for your ad, why did you think you were selecting total campaign budget?" Her e-mail also asked what other steps Facebook could take to improve the system. I replied accordingly.

Days later, Pam wrote me again, "After reviewing your situation, I have gone ahead and refunded your account for all but the first charge of $30.50 due to your confusion with our product."

This is what I expected from a company founded by a guy who's only a year older than I, and I was very happy. I imagine that a company run by a 24-year-old understands that mistakes are made, screw-ups occur and accidents happen. And because of Pam's generosity and professionalism, I plan to advertise with Facebook again in the future. Just with less money. And a better understanding of what I'm doing.

Since deleting the ad, I've noticed some significant drop-off in previous weeks. On the day I bought my first Facebook ad, my view count for the day was 106. From mid-December to mid-January, when the ad ran, I rarely ever saw under 40 for the day, even on weekends, when I don't update Fake Book Covers.

But at least now I know the capabilities of Facebook, whether advertising through your "friends" or through the actual site. You, as an entrepreneur, are always looking to get people back to your website. Facebook proved to be useful, though Fake Book Covers may not have had the big increase you were looking for when considering your business website.