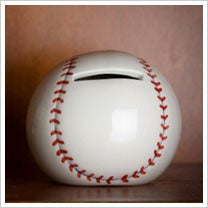 Back in Decmeber when the Yankees spent (in your best Dr. Evil voice) $340 million to sign CC Sabathia and...some guy who used to play for the Angels whose name I can't recall (or spell, I'm guessing...not that I can remember it to begin with), you saw a lot of tongue-in-cheek stories about how baseball must be immune to the effects of the struggling economy.

It was easy to be cynical about the signings, and they were used as an excuse to bash baseball's frequent and often blatant excesses. But a closer look at what has (or hasn't) happened since seems to suggest that, as with life, baseball's a pretty good metaphor for our economic woes. Sabathia and what's-his-name were the most coveted free agents of this year's crop, and as such, were signed early and for an F-ton of money by the only team able to afford such a large (not to mention fictional) sum. But less than two weeks before the start of spring training, the list of players who are still without teams is staggering.

Aside from the guy at the top of the list, Manny Ramirez, the trend seems purely based on economics. Normally, teams would sign players of this caliber faster than the Derek Jeter Fan Club can scoop up vapid young women. And veteran guys are being put out to pasture in what amounts to baseball's version of forced retirement or, at best, layoffs. It's not unreasonable to think teams that would normally go out and get these guys with relatively little concern about the price tag are now waiting it out in hopes of driving that price tag down a little.

So, at the end of the day, it looks like the economy is having about the same effect on baseball is it's having in general: The rich will find ways to get richer, while the rest of us proceed a lot more cautiously than we're used to. At least the Yankees didn't pay for their overpriced talent with taxpayers' money--they used that for their new stadium.