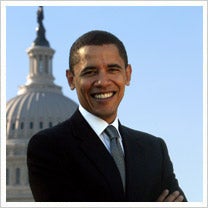 In his speech to the nation last night, President Barack Obama said the country would pull through this economic downturn, and that entrepreneurs will be a major factor in a turnaround.

"The answers to our problems don't lie beyond our reach," he said. "They exist in our laboratories and our universities, in our fields and our factories, in the imaginations of our entrepreneurs and the pride of the hardest-working people on Earth." Obama touted his economic stimulus plan as a way to get credit flowing to those very business owners that can jump-start the economy. " ... We are creating a new lending fund that represents the largest effort ever to help provide auto loans, college loans, and small-business loans to the consumers and entrepreneurs who keep this economy running."

The president argued that the federal government has, throughout history, taken a central role priming the pump of industrial and entrepreneurial growth. " ... Government didn't supplant private enterprise," he said, "it catalyzed private enterprise. It created the conditions for thousands of entrepreneurs and new businesses to adapt and to thrive."

He said one way out of this low-acheiving economy is to encourage green technology as a business: " ... We need to ultimately make clean, renewable energy the profitable kind of energy."

Lloyd Chapman, president of the American Small Business League, wasn't impressed with the speech. He echoed his ongoing concerns about the direction of the U.S. Small Business Administration and criticized the president for not targeting more stimulus money directly at entrepreneurs. "If you want to stimulate the economy and create new jobs, you have to direct federal infrastructure spending to the small businesses that create 97 percent of new jobs," Chapman stated.

Perhaps doing what he does best, the president sought to inspire Americans as much as throw stimulus money their way. "We will rebuild, we will recover," he said, "and the United States of America will emerge stronger than before."

"What is required now is for this country to pull together, confront boldly the challenges we face, and take responsibility for our future once more," he said.

His speech didn't go without finger pointing, and Obama appeared to blame the last administration for some of today's economic malaise that includes a bottom-dwelling stock market, unprecedented home foreclosures and record job losses:

" ... We have lived through an era where too often short-term gains were prized over long-term prosperity, where we failed to look beyond the next payment, the next quarter, or the next election. A surplus became an excuse to transfer wealth to the wealthy instead of an opportunity to invest in our future."

"... That day of reckoning has arrived, and the time to take charge of our future is here," Obama said. "Now is the time to act boldly and wisely, to not only revive this economy, but to build a new foundation for lasting prosperity. Now is the time to jump-start job creation ... "

Obama quoted Ty'Sheoma Bethea, a girl who attends a delapidated school in South Carolina. She sent the president a letter that states, "We are not quitters."

What Is Driving You to Want to Build a Business?