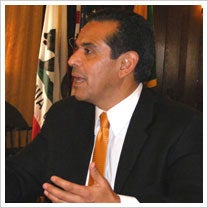 Los Angeles Mayor Antonio Villaraigosa, who's up for reelection tomorrow, recently spoke with a group of journalists, inlcuding Entrepreneur magazine, about the economic state of his city.

The mayor, who has no major challengers and is widely believed to be a shoo-in for reelection, vowed to continue to make L.A. a business-friendly city.

"I want to connect every initiative we're doing around jobs and economic development," he told reporters at a one-hour roundtable organized by CCNMA: Latino Journalists of California.


He boasted that the greater L.A. economy "is the 17th largest economy in the world," and that he would continue to pursue business-boosting initiatives such as a proposed "subway to the sea" for the city's Westside.

Jack Kyser, chief economist at the Los Angeles Economic Development Corporation, says the mayor has been seen as a friend of entrerpeneurs, but that his hands might be tied if the nation's economy continues to slide downward, as the LAEDC predicts (PDF).

"He was a champion of the convention bureau and getting major business conventions to come to Los Angeles," Kyser says. "He supported the development of the Convention Center hotel, which opens next year. You can consider him business friendly. But in some cases there's only so much you can do."

Villaraigosa, like many big-city mayors, is facing budgetary black clouds: In L.A., the city budget deficit could grow to $1 billion in the next two years.

"Going forward, he's going to have his hands full becaue the city has a huge budget deficit," Kyser says. "There could be an issue of raising taxes, which might hinder the ability to retain or attract business."

For his part, Villaraigosa says he went to Washington recently and lobbied President Obama in the White House for a share of stimulus funds. "I'm going to be in Washington a lot," the mayor said. "I want to get every dollar of those stimulus [funds] that we can."

On the question of whether Villaraigosa would run in 2010 for California governor, as many observers expect, the mayor said, "I love what I do ... It's a city-state.

"It's going to be hard to take me away from this."