Employment? Down. Retail? Down, But Not Out 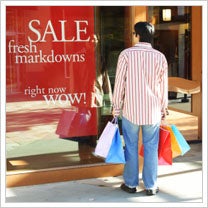 American small businessses shed 262,000 jobs last month, according to a report (PDF) issued today. The ADP Small Business Report surveys American operations that have less than 50 employees and states that February job losses for entrepreneurial operations were worse than those in January.

The service sector alone lost 146,000 positions while the "goods-producing sector" of small business let go of 116,000 people, according to ADP. Medium-sized businesses (those with more than 50 and less than 500 employees) downsized by 314,000 positions. "The magnitude of this month's job loss indicates that the recession has spread aggressively to small-size businesses," states Joel Prakken of Macroeconomic Advisors. "Earlier in the recession these businesses had demonstrated more resiliency than medium- and large-size ones, but that is no longer the case."

The report marks four continuous months of job losses for small businesses. Meanwhile, Retail Metrics states that, likewise, same-store sales in the United States are projected to fall for the fifth straight month for February, with a 1.1 percent decline expected. That would be an improvement over January's 1.8 percent drop, however.