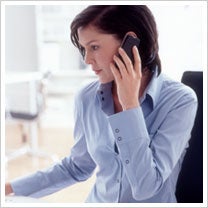 Anybody remember GrandCentral, the phone service that combined all your phone lines into one universal number? For the past couple years, since Google acquired it in 2007, its face has been on the side of a milk carton. That is until last week.

Turns out, Google has been working on beefing up the service this entire time. Going live last week for former GrandCentral users, Google Voice adds oomph to an already hefty service.

GrandCentral users enjoyed a single number linked to all their lines, land and mobile; a single voice mail box accessible by dial-in and online, with downloadable audio files; the ability to screen callers with precall prompts; multiple voice-mail greetings; and call recording.

Voice's enhanced service keeps those benefits and tacks on free voice-mail transcriptions, free conference calling, cheaper-than-Skype international calling and SMS organization features (send them to any cell, and save and organize them online). Naturally, users can synch their Gmail and Voice addresses.

So for those of you entrepreneurs juggling an iPhone, BlackBerry, office line and home phone, Voice lets you put a leash on text messages, voice mails and phonebooks that have been running wild. Google will release Voice to the general public sometime in the next month, so stay tuned.

Get Your Kids into Coding for $10