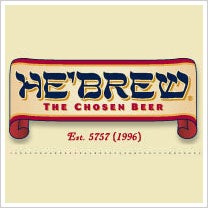 I first started at Entrepreneur in June 2007 and, at the time, had a very boring perspective of business. Business wasn't quirky to me. No, I didn't think that everyone was a suit, but even those who ran small businesses had a very distinct personality, I thought.

Small-business owners were serious about trying to succeed, which in turn, sort of just made them serious people, I figured. To me, businesspeople were businesspeople, whether they worked in a corporate headquarters or a dinky little office. However, as an intern, I was quickly assigned to a research project where I was to investigate the craft beer industry, and I soon learned that a number of entrepreneurs not only had senses of humor, but they applied them to their actual business, their products, their websites and their marketing strategies.

And the first business I remember respecting the originality of was Shmaltz Brewing Co. for "He'Brew - The Chosen Beer" and the Lenny Bruce tribute pale ale "Bittersweet Lenny's R.I.P.A." Their gags were clever and, most importantly, a good sell for their products.

So I thought it was only fitting that I approach founder Jeremy Cowan for my first "Important Questions" back in October 2008. But Cowan was extremely busy throughout the rest of 2008, seeing quite a swell in business. Well, he recently got back to me.

You can tell it was my first "Important Questions," as there's no 27-Word Question and the fancy business questions don't seem as poignant. But Shmaltz is celebrating its bar mitzvah this year and to pay tribute to a clever company, I asked...

1. What's the next big plan for He'Brew?
JC: This year, Shmaltz Brewing turns 13, which in Judaism, marks the year of the Bar/Bat Mitzvah, the coming of age for a Jewish boy or girl. For Chanukah, we will launch Jewbelation Bar Mitzvah as we celebrate 13 years of delicious beer and delicious shtick. The label design will feature micro images of publicly submitted bar mitzvah photos. Should be really fun.

2. Who's next in line for the tribute to Jewish Stars?
JC: Top Secret, totally hilarious and, of course, mythically delicious.

3. What's been the most rewarding moment for you with He'Brew?
JC: I'm certainly really excited about the growth of the company over the past five years (1000%), but I'm most proud of the quality and uniqueness of the products we've created, and drinking a Shmaltz beer with the kick-butt staff that has become my working family over the past two years!

4. I have some friends that brew their own beer. One or two have talked about starting their own company. Any advice?
JC: There are a lot of brewers in the United States and He'Brew really developed a cult following because of the quality of our beers. Yes, we have a lot of fun with our labels and our branding, but it's all about quality and creativity. In the current market, it must be exceptional beer to gain a dedicated fan base. Do something unique and interesting and share the passion with others relentlessly...and wake up every day and do it over and over and over!

1. What is your favorite album to listen to while enjoying good craft beer?
JC: I dig Corn Mo and the .357 Lover's "Your Favorite Hamburger Is A Cheeseburger." I love this band! Dave C. Wallin, the tattoo artist who designed the labels for Coney Island Craft Lagers, is the bassist for Corn Mo. Fun stuff to rock out to!

2. Who's the toughest celebrity you think you could beat in a boxing match?
JC: Meatloaf

3. What book, movie or show changed your life?
JC: Watching The Daily Show for the first time. I was waiting for someone to really challenge the current platform of news reporting. I love how Stewart combines political commentary with humor and hard news. Jon Stewart rocks.

4. What's your favorite movie trilogy?
JC: Spinal Tap, Best In Show and A Mighty Wind. This is my favorite set of three movies with the same set of actors. As an ode to the Tap, for our anniversary, Shmaltz Brewing released Jewbelation Eleven with a giant amp turned all the way up--to 11.

5. What and where is your favorite establishment to drink? Where is your favorite non-beer drinking establishment?
JC: Damn tough question, since Toronado in San Francisco and Blind Tiger in New York City have been so great to Shmaltz Brewing...but I'd probably say Spuyten Duyvil in Williamsburg, New York. They serve the finest American craft beers, and consistently switch up their beer menu to feature the best seasonal beers. They have a great little beer garden in the back of the bar, which is great during the summer months. Favorite non-beer bar though is at the sideshow in Coney Island.

The Beatles Question
Who's your favorite Beatle?
JC: Ringo Starr. For decades, he's handled all of The Beatles fan mail by corresponding directly with their fans. Now that is truly amazing.