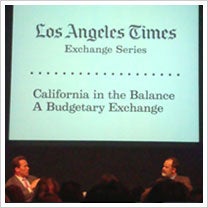 In a forum Wednesday evening, California Gov. Arnold Schwarzenegger addressed the Golden State's $42 billion budget deficit and fielded questions about a series of proposed ballot initiatives to help close the gap. He spoke optimistically about the state's future to a crowded auditorium in the Los Angeles Times building in downtown Los Angeles.

"Crisis brings action," he said, asserting that the six ballot measures would work to offset the shortfall and prevent budget impasses by capping annual spending and creating a rainy day fund. "It's time to fix [the system] once and for all."

If the reforms come to pass, the resulting increase in budget stability will be welcome news for entrepreneurs in California, which ranks as the world's eighth-largest economy (behind Italy and just ahead of Spain).

"Crisis sometimes brings great opportunities," Schwarzenegger added. He noted that California is negotiating for a portion--and possibly the majority--of the $7 billion in stimulus money earmarked for high-speed rail investment. The goal, he said, is to forge ahead with plans for a high-speed rail line within the state, a development that would boost growth and provide potential business opportunities. "How fast we move people and goods around--that is economic power."

The governor also praised the legislature for passing the budget last month, despite unpopular moves to cut education programs and implement tax increases. The actions were difficult, but necessary, he said. "When you see a $42 billion problem, that's the decision you have to make."

Propositions 1A-1F will be put to a vote during the May 19 special elections.