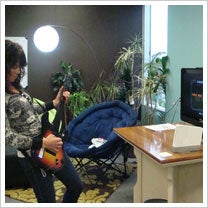 Consider Salary.com's 2008 Wasting Time at Work survey, which concluded that a "record number" of people waste time at work, up nearly 16 percent from 2007. That doesn't bode well for employers, you might think--and before Wednesday, I would have thought so, too.

I would also have considered computer games a form of "personal internet use," a category that tops the survey's list of popular time-wasting activities. Again, as I discovered, maybe not.
Advertising and design firm TAXI New York, named Strategy Magazine's 2008 Agency of the Year, has come up with a strategy that not only allows for some gaming fun, but also does businesses some good.

Inspired by the classic "Asteroids" arcade game, players in TAXI's version maneuver a paper rocket that shoots pushpins at crumpled up paper balls and newspaper clippings-cum-enemy craft bearing headlines like "Economic Crisis" and "Turbulent Markets" and even a bar chart that dips dramatically in 2008.

Anyone can play, but TAXI staff will be tracking the scores of businesses they are interested in working with, with the highest-scoring participant among U.S. marketers winning free TAXI services on a project of their choosing. And if it works, the plan is to expand the campaign.

The point is, playing games might not be such a bad idea, and in this case, is being used to execute one of the most creative marketing ideas I've encountered.

Moreover, there's research that argues office gaming can be good for both employers and employees. Back in 2003, scientists at the University of Utrecht conducted a study that suggested playing simple computer games at the office could improve productivity and job satisfaction. And incidentally, being unsatisfied at work is the most common reason employees are wasting time, according to the Salary.com survey.

In case you're wondering what the kids are playing these days, or just want an edge on your competition, these are leads on the top mini-game sites, as told to me by a very reliable source:
Apparently, Sumo Volleyball on MTV Arcade is pretty good, too.
_

(Pictured at the top is Entrepreneur.com's own Kara Ohngren warming up for a productivity-inducing game on the office Wii.)