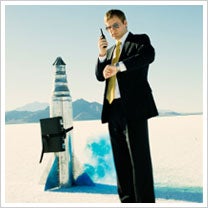 Day two at the Milken Institute's 2009 Global Conference has wound down, and there's a lot to share.

Bad news first. During lunch, Milken Institute Chairman Michael Milken talked with a panel of Nobel laureates in economics about capitalism, touching specifically on the expanding role of the government in free markets. Gary Becker, who won the 1992 Nobel prize for pioneering research that extended microeconomic theory to human behavior, issued a damning statement: the economic stimulus won't work.

He said it would be "impossible" to ensure that the money is spent efficiently, given how quickly the Obama administration wants it injected in the economy. And since capitalism has proven to be the best engine for raising incomes around the world, meddling with the system can only lead to more bad news.

Milken seemed to agree, pointing out that in roughly 11,000 years of human history, economic growth has been minimal; only in recent decades has that changed. When taking a truly macro view of the economy, he continued, "the patient may not be that sick."

On a more optimistic note, I attended two especially interesting panels on venture capital and entrepreneurship--which I'll be blogging about in detail later this week--and caught a few minutes with X Prize Foundation chairman and CEO Peter Diamandis, who helped create a commercially viable spaceflight industry with the Ansari X Prize, awarded to the first private group to build a personal spacecraft that could clear the earth's atmosphere twice in two weeks. The $10 million was won by Burt Rutan (project financed by Microsoft co-founder Paul Allen) in 2004, and John Gedmark of the Personal Spaceflight Federation has said the industry should be making headlines again soon.

I asked Diamandis how innovation might still happen if a bigger government disrupted or impeded business creation. He suggested that breakthroughs can and will occur, as long as certain conditions are met--perhaps with the help of organizations like the X Prize Foundation.

"I think innovation fundamentally comes from the hearts and minds of individuals ... and we can focus that by identifying clear, inspirational objectives and providing people with incentives to go and try and solve those problems," he said. "One of the attributes of true innovation is having nontraditional groups taking nontraditional approaches, and you have to create an environment that allows both risk-taking and failure. If people are scared of failing, they'll take the safe approach, which is really one that gives you incrementalism rather than true breakthroughs."

And finally, I asked him if there was a particular reason so many successful entrepreneurs--himself included--have chosen to put their resources behind the pursuit of space exploration.

His answer was great, if a little unexpected.

"Well, a lot of that is because all of us were kids when Apollo and Star Trek were going on, so that seed got planted in our minds," Diamandis said. "And there's a disconnect between where things are today and where we thought things would be. So those who've got the means and the resources end up saying, 'I'm going to create the future I always envisioned as a kid.'"

There you have it. Proof positive that you don't need to give up on your childhood dreams.

Entrepreneur won't be at the Global Conference on Wednesday--but no worries. Videos of all sessions will be available on the Milken Institute's website.