Jennifer Wang
Writer and Content Strategist
home
May 12, 2009 min read
Opinions expressed by Entrepreneur contributors are their own. 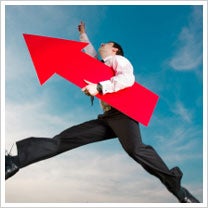 Entrepreneur is in Anaheim, Calif. today, getting the low-down on what small-business owners think about the economy. SCORE and American Express OPEN have made a pit-stop here on their Small Business Speed Coaching Test Drive tour, offering 30-minute coaching sessions with business counselors and workshops on government contracting, cash management and business strategy, all at no cost to attendees. If you live near a city on the circuit schedule, it might be worth your time to go.

The mood of the 200-some attendees seemed overwhelmingly positive, and it was good to see that optimism spread across diverse industries. For example, Diane Cuniff, president of cageless doggy daycare The Bone Adventure, was here for advice on whether to buy or lease property for a second location. Monica Herrera and Ronald Brown, respectively CEO and CTO of Aquatic Resource Farming, Inc., are starting a biofuels project they are certain will lead to government contracting opportunities. Carol Tenney is making the jump from attorney to Stories for Nieces web content entrepreneur because she thinks the playing field is being leveled and now is the time to jump in.

Regarding the stimulus efforts by the federal government, there are two messages I think business owners might find interesting.

1. There are government procurement opportunities for everyone.
"This is relevant to all businesses," Michelle Thompson-Dolberry, director of advocacy marketing at American Express OPEN, told me. "The government is the largest purchaser of goods and services in the world, bar none. Virtually every good and service imaginable, the government procures."

2. Get into contracting now, or risk being left behind.
According to Barbara Kasoff, president and CEO of Women Impacting Public Policy, the relationship between government and business is changing, so it's time to change how you do business, too.

"If you're going to survive, you have to know the trends," she said. You should also look at the government like any commercial market you want to break into. "You have to research the market, find out your competitors, build relationships--it's exactly the same process."

I later sat in on a speed coaching session with Vanessa O'Neill, president and CEO of Cedar Spring, Inc., a company that works with the Centers for Disease Control and Prevention and the Department of Homeland Security to fulfill their health and safety requirements. She listened as SCORE marketing expert Bruce Schoenegge walked her through some strategies to expand into commercial markets.

Finally, there was the obligatory economic forecast, delivered by Esmael Adibi, professor and director of the Anderson Center for Economic Research at Chapman University. He accomplished what I consider a near-impossible feat: he made the forecast entertaining by bucking the stereotype of the gloomy economist, purveyor of the "dismal science."

Although he's not sure policy is on the right track (he fears inflation and thinks tax rebates inferior to cuts in payroll taxes), he sees the light at the end of the tunnel.

Adibi predicts the recession will be over by the end of this year, and job numbers will turn up around the middle of 2010. And with an excellent track record of divining the twists and turns in the economy, his opinion just might matter more than most. He called the housing boom for what is was--an unsustainable bubble--way back in 2005, and when Chapman released its 2008 forecast in December 2007, his team of forecasters said the US was headed into a recession--a year before the National Bureau of Economic Bureau officially declared them right.

It's not all good, of course. Adibi noted that the economy will recover, but future growth will be sub-par, because the US is not addressing fundamental problems within the education, healthcare and retirement systems. Our productivity will suffer, he warned, because without innovation, growth will be slow, and stagnation will linger.

But for entrepreneurs, at least, opportunity trumps fear. Now if only the banks would see that.