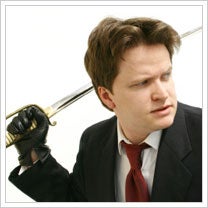 "What do you need MOST right now to stimulate your business?" This was last week's featured question on Entrepreneur Connect, and we got a lot of good responses. Confidence and certainty, some said. Sales and easier access to financing, said others. Clearly, things aren't right yet, but no one sounded defeated.

This might be because entrepreneurs who have made it through the low point earlier this year have come out stronger. They're "battle-tested," to use a great adjective I recently heard used to describe small business owners.

During a Business Matchmaking event in Orange County, Calif., I had a chance to speak with Hector Barreto, former head of the U.S. Small Business Administration; Ken Yancey, CEO of The SCORE Association; and Brian Burch, HP's director of SMB marketing. The overarching sentiment? Main Street will come out of the recession stronger than ever.

Barreto, SBA administrator between 2001 and 2005, even thinks that the recession may ultimately be thought of something that was good for small business. "It's a very sobering wake-up call," he said.

For instance, a few years ago, a conversation might go like this:
SBA: You can save money by doing this.
Biz Owner: Oh I don't care much about that.
SBA: But it's $100,000...
Biz Owner: Well, it's just too much trouble for me to change what I'm doing right now. I'm making money anyway, so thanks but no thanks.

"Nobody's saying that now," Barreto asserted. "If you come to someone with an idea of how to save $10,000, they want to know when to meet and where to sign. We don't know how long the recession will last, but it's not going to last forever. Business owners are going to prepare to come out of this stronger, smarter, better than ever, and maybe make decisions they know they should have made years ago. They can't postpone those tough decisions anymore, but the business will be better off for it."

Burch agreed. "Companies are learning by going from an environment where success came easy relative to now, and they're maturing in terms of heart and business sense. People are just so incredibly savvy and aggressive," he said, adding that business owners are feeling "gritty" determination. "They are committed to succeeding. We've never been here before, but it's a very dynamic time that will result in an even more battle-tested small business sector."

"It's back to basics," SCORE's Yancey added. "Entrepreneurs are truly going to understand all the nuts and bolts of running their business, and they're going to be prepared to be successful and weather any other downturn better than they did this one." He also noted there would be a lot of "accidental entrepreneurs" from all walks of life who will consider this a great opportunity to start over and do something unique.

Burch is particularly excited by the idea. "I don't think there's ever been a flood of collective brainpower into the small business realm like there is now," he said. "And I don't think we've ever seen the environment for innovation that we're going to see. Many people are out of a job who are incredibly business savvy and with money and means to invest. When we come out of this, it could be a freight train."

He wrapped it up this way: "You could argue that these hard times are going to kind of be the flint and tinder to another big innovation explosion, because when you put smart people together in a room and they align around some sort of a problem or objective, amazing things happen."

Needless to say, I felt all motivated.