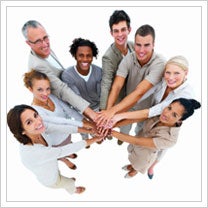 If you're flirting with the idea of becoming an entrepreneur, there's a website just for you. Outright, a free online bookkeeping site, and web services provider Network Solutions have teamed up to launch UnintentionalEntrepreneur.com, a free online resource for aspiring business owners and the self-employed.

Tomorrow, Outright co-founder and CEO Kevin Reeth will be in Los Angeles hosting the second in a series of Unintentional Entrepreneur networking events. If you're in town, here's why you should attend. (Check the schedule for upcoming events in New York City, Washington DC and Atlanta.)

What will the event be like?
We borrowed heavily from successful events like LaidOff Camp. We're keeping it lightweight, organic, and bringing in experts on starting a business and being an entrepreneur. We don't want to preach; it will be very open to discussion because we want to see where the community takes it.

We're starting with core concepts around getting a business off the ground, and finding people who've been doing this for a while, and who do have a track record and can say what works and what they totally goofed up on.

Why is something like this needed for the "unintentional entrepreneur"?
There's evidence of a trend that people who have held corporate jobs and been laid off or seen reduced hours are more seriously considering working for themselves. But a lot of these people who have worked for others for most of their careers lack preparation and knowledge of what it means to be self-employed. We're trying to help people get beyond those initial hurdles so they can move the discussion to where they should really be spending their time--like networking.

So another big part of this is that doing a local event can create a support network and help build people's confidence and commitment. It can be lonely going out, so to have other people to relate to is probably the coolest thing about the event.

How was the attendance at the first event in San Francisco?
The attendance was good, and the diversity of backgrounds was a surprise. There were people who have been out of work for a while, and others who are just wondering if this was something they should do because their jobs aren't going well. One person said he'd made a decision to invest 50 percent of his time in starting a business, and the other 50 percent in finding a job.

What are these aspiring entrepreneurs finding difficult?
Well, it's just a tougher market, but one thing that's interesting about people who have corporate backgrounds is that they don't always understand basic stuff about being self-employed, like what it will mean for your taxes.

Most people we talk to, their focus is on getting paid. But there's all this other stuff that is pretty daunting if you haven't done it before.

So is there a silver lining?
There's less opportunity, fewer jobs and spending is down, but one of the good things is technology has gotten to the point with open source and crowd-sourcing and user contribution systems that the cost to logistically get a business up and running has never been cheaper.

We're trying to get people to understand there are going to be challenges, but there are some positives you can take from it, and some best practices you can use.

And what does the Unintentional Entrepreneur website offer now?
It's still very lightweight, because we just did our first event last week. Right now it's blog content from experts, and we will be uploading material and resources from the different events and trying to get some discussions going. We've got a LinkedIn group very much in the spirit of education and sharing techniques on how you can get a business presence up and running quickly.

So clearly, you expect unintentional entrepreneurs to make a big difference in the economy.
They'll be hugely important. The reality is, companies are still trying to get back to profitability, so they're not hiring, and they're still shedding jobs. So it's forcing people to get a lot more creative, and I actually think that while it's very painful to go through this transition, in the long run, it's a very good thing.

Why is that?
If you think about it, over the last several decades, as a country, many have been trained to go work for somebody else--get a job, get a career. But you lose a lot of skills that help you find your own way in the world. Now we're seeing those big companies, those careers and the big pensions we thought we could rely on going away, and the world is getting much more competitive.

This way, we'll be forced to learn so much more about so many different things. It's going to raise the talent level so that we'll be able to compete on a global [scale]. And as these folks grow more successful and find these new opportunities, they will do the hiring.
_

Other resources for unintentional entrepreneurs can be found at The Smarter Wallet and the Accidental Entrepreneur's Guide to Self-Employment Success.