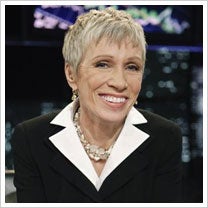 Entrepreneur.com talked to Barbara Corcoran for the next in our five-part interview series with "Shark Tank" judges. (Read the first Q&A here.) The show, which debuted on August 9, has a simple hook: Watch entrepreneurs plead their case for capital to five investors (aka sharks) who have no problem ripping bad ideas to shreds.

And if you want proof that real deals are happening, get this: When we caught up with Corcoran, she'd just finished up a business call with episode one's Tiffany Krummins, who got $50,000 to fund production of Ava the Elephant, a cute elephant-shaped medicine dispenser for children. The website is now up-and running (but if you want one, it's back-ordered until November 30), with store distribution to follow shortly.

Still, contestants who leave the "Shark Tank" empty-handed (and probably hurting a bit) can take heart in Corcoran's own story. Her $5 billion real estate empire sprang from a humble $1,000 loan from her boyfriend. So obviously, there are other ways to the top.

So how do you like the other judges?
I love the fellow judges. I mean, I can't stand them when we're on air, because if I think for a minute they want what I want, I won't remember what I liked about them! But after the show I realize what great guys they are.

Do you think some of the sharks are more willing to spend their money than others?
No. It goes up and down. It has an awful lot to do with your personal tastes and what appeals to you, and where you put the importance as in investor.

And what do you want to see before putting money into a venture?
For me, it starts and finishes with the entrepreneurs themselves. If I'm totally sold on their ability to see something through, that they're going to make a success of it no matter what, I'm 90 percent in--and willing to overpay, frankly, for that great benefit called people insurance. If you find the right person, they'll find a way, come hell or high water, to make it happen.

What other qualities does the "right person" have?
Believability, wild-assed enthusiasm, logical answers and lack of cockiness are key to me. Also genuineness, total passion and belief in what they're doing, and that they're deep into it with their own money--and if they're tapped out, it's even better.

What would your own chances have been on the other side of the table?
I think they would have been slimmer than they were by dating a guy who loaned me the $1000. [laughs]

I would have had a heck of a time selling the sharks on a dream only I saw in my mind's eye. If they had asked me questions about returns, I would be saying, dumbfounded, "I don't know, I don't know," again and again, which wouldn't go over well.

Then what business decision do you think really contributed to your success?
I guess not knowing anything before I jumped in. Because once you're in there, if you have the wherewithal, the enthusiasm, the passion, you'll learn how to swim. So I'm happy I didn't know what I didn't know.

You've said that in one year, you went from trying to meet rent to buying your parents brand-new cars. What was the turning point?
The New York City real estate market just exploded, and I was in the right place at the right time. I had, unlike my competitors, survived the last downturn, so no one was standing except for me, and I was there to pick up the pieces. It was kind of lucky timing.

But you had the ability to make something happen.
Yes, and that goes right back to what I said earlier. What I'm looking for on the set is [someone] who's going to make it happen no matter what, because those "no matter whats" are going to happen in business. You can count on it; it's just a matter of when.
_

For more coverage on "Shark Tank," check out our profile on producer Mark Burnett. Starting August 25, the show will air on Tuesday nights at 8 pm.