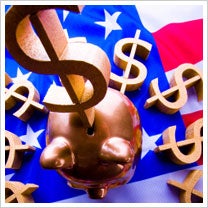 There's good news and bad news for small businesses interested in doing business with the federal government. A report recently released by the Small Business Administration assessed how much small businesses got last year, and whether the feds met their Congressional mandate of awarding at least 23 percent of their contract dollars to small businesses.

The good news: A record $93.3 billion in federal contracting went to small biz in 2008, almost $10 billion more than small business owners got in 2007. Disadvantaged businesses, including those owned by disabled veterans, saw their share increase by $1 billion to $3 billion.

The bad news: That's only 21.5 percent of the $434 billion total, as reported by The Federal Times. In 2007, small biz got a 22 percent share of this business, so on a percentage basis, small biz lost ground. The Times says growth in defense and homeland security, areas that tend to be the domain of larger corporations, are partly to blame. Only the General Services Agency met its overall small-business contracting goal.

Another piece of good news: when it comes to federal funding from this year's stimulus bill, small business did better. Of $8.1 billion in stimulus funds distributed so far, about $1.9 billion, or 23.4 percent, went to small firms, Wall Street Journal recently noted.

Given what's going on in the economy generally, winning government contracts is looking more attractive. Lots of small businesses never give this customer a thought, intimidated by the paperwork and the competition. But it's never been easier to learn how to be a government contractor. You can find federal contract postings at FedBizOpps. There's also a Federal Contracting Network where contractors can chat online and learn from each other.

One great way to start out is by being a subcontractor for a company that's won a government contract. That gives you a track record doing government work that will bolster your case for winning contracts on your own. The SBA even operates a Subcontracting Network where companies can troll for subcontractors, and subs can look for opportunities. Another option: go after state, city or local contracts as a way of building your government-contractor cred.

If you've thought about becoming a government contractor, now's a great time to give it a try. Public outcry over the feds' shortfall in assignment contracts to small businesses will hopefully mean pressure to get more money into small business's hands in the coming year.

What's holding you back from applying for government contracts? Plenty of help mastering the process is available.