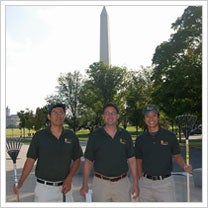 When President Obama declared a National Day of Service on September 11th, the folks from DoodyCalls had already gotten a head start. Franchisees, employees and even the president of the pet waste removal franchise spent September 10th giving the National Mall a much-needed makeover by doing what they do best--scooping poop.

DoodyCalls President Jacob D'Aniello and the rest of the cleanup team volunteered their services after reading a letter to the editor from a Washington, D.C. tourist complaining about the appearance of the Mall--and, in particular, the goose droppings that littered it.

While they're more accustomed to cleaning up after canine companions than wild geese, they were happy to offer their expertise to give America's Front Yard a bit of its luster back--and combat the health problems that goose waste can cause.

Though this may be the first time a franchise has helped clean up goose droppings in the nation's capitol, community service is nothing new to the franchising world. Many franchisors and franchisees try to give back to their communities through services and donations--not just because it feels good, but because it's good for business, too. Helping others for free now can mean the difference between a paying customer choosing your brand over another later on.

And it only makes sense that the best community outreach programs relate in some way to the products and services that the franchise provides. So a restaurant franchise might donate food to those in need, a fitness franchise might offer free health seminars, a home repair franchise might volunteer to rejuvenate public buildings, and so on.

So when D'Aniello read that letter to the editor, he must have felt like Batman seeing the Bat Signal flash on overhead. And now tourists and D.C. residents alike will be glad that he and his franchisees came to the rescue.