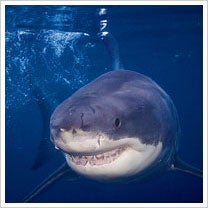 After six weeks of watching ABC's "Shark Tank"--a reality series featuring real negotiations between entrepreneurs seeking capital and five investors--there are certainly lessons to be learned. Not the least of which: know when to take the deal.

And it's hard when almost every deal includes one or more of the sharks taking over your company. However, when you're an inventor with no distribution contacts and the investors are offering to take your product to market and pay you a lifetime of royalties, maybe taking the deal would be a smart move.

Let's look at Jeff and Josh Cohen, father and son team who created and patented a hinge for a functional folding guitar. It seemed apparent to everyone but Papa Cohen that his most profitable bet was to license his hinge to a manufacturer and collect a percentage of the sales. Not only was his valuation off $500k for a 5 percent stake outrageous, he also turned down a deal that would have made his the most money with the least amount of work.

When judges Kevin Herrington and Kevin O'Leary offered $500k for 51 percent of the patent holding company, with a promise of a television platform and a possible licensing deal with a manufacturer, the Cohens should have jumped. Instead they declined and now have to figure everything out on they're own--from the financing to developing their own relationship with manufacturers.

O'Leary called Mr. Cohen out on his greed and when Cohen suggested they might be able to work together in the future, O'Leary responded, "You're dead to me when you say no to my deal."

Robert Alison invented Lifebelt, a device to prevent cars from starting unless the seat belt was buckled--yet another great idea best suited for installation at the point of manufacturing. He too, owned a patent for his idea and had over valued his product. Alison's cause seemed to be noble: he believed his invention would make people safer and he wanted to get it into as many cars as possible.

Admittedly, it was smart on Alison's part not to jump at the offer from Robert Herjavec to buy his patent for $1 million. It would have been even smarter for him to make a counter offer licensing his patent in exchange for royalties. Herjavec has the contacts to make a deal with a manufacturer which meant that Herjavec could make Alison's goal of getting Lifebelt into as many cars as possible a reality. And Herjavec was taking on all of the legwork to boot! Alison could have made millions without having to do the hard work of running a business. Instead of countering and determined to start a business, he declined the offer.

Quite possibly the smartest deal made on the show thus far was the one made by Jonathan Miller, creator of Element Bars, custom energy bars. The sharks were completely enamored with this young entrepreneur's savvy and ability to play hardball. Miller made it apparent that he needed funding, but he was not desperate enough to give up ownership of his company or control of his product.

Miller still refused, saying that Harrington needed to come down to his negotiating range of 25 percent equity. They met in the middle and Miller got his $150k, the 4 percent licensing fee and only gave away 30 percent equity in his company.

Harrington may have been the shark but Miller was the winner in that deal. He got his requested investment plus a percentage of sales in perpetuity and maintained control of his business. When the sharks bit, Miller bit back and got the upper hand in the negotiation.
More from Entrepreneur