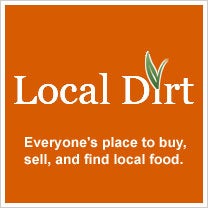 Social media isn't just the massive sites that are discussed endlessly--Twitter and Facebook and LinkedIn. In some industries, powerful industry-specific sites--known as industry verticals--are being created to help industry players connect with each other and with customers.

An example is LocalDirt.com, a new portal that connects farmers with customers nearby. The site debuted at the Fall 2009 DEMO technology conference in San Diego last week, pitching its concept to conference producers along with 70 other tech firms. Local Dirt won a DEMOgod award, given out at the event to exceptional companies, and was also picked by innovation and venture-capital newsmag VentureBeat as one of the 10 best companies at DEMO.

Local Dirt enables small farmers to receive Web-based orders from buying groups and individuals, which are then delivered to farmer's markets for customer pickup. Larger farms can indicate where their food is sold so customers can find them in local stores, or can ask their local shop to stock their favorites. The site is free for buyers, while distributors and big sellers pay several hundred dollars a year to participate.

The site basically makes shopping for local food easy. It's hard to imagine it won't lead to increased business for farms marketing local produce as word spreads among locavores about the site.

What is your business sector doing to make it easier for you to connect with customers? If there isn't a good vertical for your industry, maybe it's time to call your association. Or organize a vertical on your own.

This sort of thing is known as co-opetition--competitors co-operating to bring more business to all, while remaining competitors. In times like these, similar businesses have a lot to gain by pulling together to find customers.