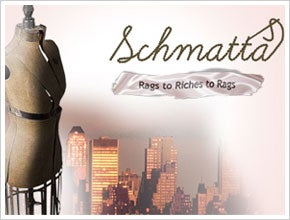 Last night I was watching the HBO documentary Schmatta: Rags to Riches to Rags, which chronicles how Jewish and Italian immigrants created the New York garment district soon after the turn of last century, and built it into the largest employer in the city. It goes on to show how, after more than 70 years of being a thriving source of good-paying union jobs, it all disappeared as trade protections ended and NAFTA ushered in a new era of global free trade.

The film repeatedly asks the questions: How will we rebuild the American middle class? Where will tomorrow's living-wage jobs come from?

In the 1970s, the film reports, 95 percent of American clothes were made here. Today, it's 5 percent. The days when an unskilled laborer could learn to be a cutter or machinist on the job, make a good living, and be able to afford a house, a car, and other middle-class trappings seem gone. Just ask Detroit. Or ask Boeing workers in Everett, Wash., who learned this week that their company will build a new 787 assembly line in cheaper, nonunion South Carolina, instead of next to their existing union-staffed plant.

Despite the current gloomy headlines, I believe these moves don't spell the end of good, living-wage jobs in America.

Why? I look to my own family story. My grandfather originally sold buggy whips, working as a salesman for another company. When people started driving cars, he switched to automotive parts and started his own business, which thrived and left my grandmother well-fixed after he died. When his living-wage job disappeared, he looked at how the world and markets were changing, and figured out how to create another job--by building a successful business of his own, that offered others good jobs, too.

Yes, it's true that clothes are mostly made elsewhere now, and that the American public no longer seems to care to "look for the union label," as the old jingle went. Change has come, and it's wrenching, and there are workers who are the losers.

But all across this country right now, there's a surge of entrepreneurial energy as more and more workers strike out on their own. Having closely covered the rise of Amazon.com, I think that tomorrow's American living-wage jobs are going to come from new ideas, new businesses, and new entrepreneurs, who are out there right now, creating products, services and ways of doing business that will revolutionize how we even think of work and define a "good job."

I also think of American Apparel, which is seeing smash success making its clothes here in the USA. I think it's possible that as the "eat local" and "buy local" movements progress, we might see more consumer pressure to bring manufacturing back to our shores. Geopolitics may also drive a trend back to domestic manufacturing--think how nervous garment makers with factories in Pakistan probably are about now.

Where do you think tomorrow's living-wage jobs will come from? Comment and let us know.