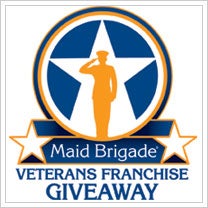 Back in July, I blogged about Maid Brigade's Veterans Franchise Giveaway. This week, to coincide with Veterans Day, the company announced the results of the contest, after narrowing the field down from over 100 entries to six finalists. The winner of Maid Brigade's "Gold Award"--including waived franchise fees, equipment, training, and $27,500 in working capital--is Major Philip Thomas Piaget, a retired Airborne Ranger.

Piaget is no stranger to being honored for his military service--over his 20-year career, he's been awarded a Bronze Star, a Purple Heart and numerous Meritorious Service Medals. He retired from the Army in September, and entered the contest the same month, writing in his application: "I think that my life as a leader of infantrymen and that of a quality Maid Brigade franchisee have very much in common. Trust that my subordinates and superior officers have in me was unquestioned, and my integrity was neither for sale nor up for negotiation. This same uncompromising standard will help to develop dedicated, loyal, and trustworthy employees who understand what we stand for as a company."

Maid Brigade isn't the only company to recognize the value that veterans can bring to a franchise. In fact, this week also marked a milestone for the International Franchise Association's VetFran--a program reinstituted after the September 11th attacks through which almost 400 franchisors offer special discounts for honorably-discharged veterans. Brian Gadson, another Army veteran, became the 1,500th person to purchase a franchise through a VetFran discount. His chosen franchisor, Meineke, reports that it has now provided $500,000 in VetFran discounts.

Meanwhile, the IFA has been urging Congress to pass legislation that would encourage even more franchisors and veterans to team up. Introduced earlier this year by Representatives Leonard Boswell and Aaron Schock, the Help Veterans Own Franchises Act (H.R. 2672) proposes a tax credit for franchisors that offer discounts to veterans, as well as a tax credit for veterans who open franchise businesses in their communities.