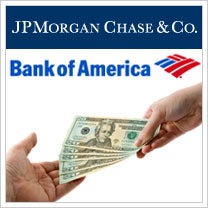 It appears that all of the pressure President Obama has been putting on top banks to expand credit access to small businesses might finally be paying off.

Bank of America recently pledged to increase lending to small- and medium-sized businesses by at least $5 billion in 2010. While JPMorgan Chase committed to boosting small business lending by up to $10 billion next year.

The announcements came at a meeting of key bankers at the White House Monday by Bank of America CEO Kenneth D. Lewis and JPMorgan Chase CEO Jamie Dimon.

Through the first three quarters of this year Bank of America has extended more than $12 billion in credit to small businesses and modified 49,000 small business loans.

"Bank of America is determined to do our part to help the economy grow next year and reduce unemployment by making every good loan we can make," Lewis said. He acknowledged how important small businesses are to the overall health of the economy, calling them the "lifeblood."

Bank of America is currently the second largest small business lender in the U.S., behind only Wells Fargo, according to reports filed to the Treasury Department. "[Small businesses'] ability to prosper and grow is key to job creation to help our nation recover from the economic slowdown," Lewis said.

"Last month, Chase announced plans to increase lending to small businesses by up to $4 billion in 2010, boosting expected new lending to about $10 billion next year to this vital segment of the U.S. economy," Dimon announced.

Chase currently has $29 billion in outstanding balances in the form of loans, lines and credit card balances to small businesses.