Carol Tice
Owner of Make a Living Writing
December 23, 2009 min read
Opinions expressed by Entrepreneur contributors are their own. 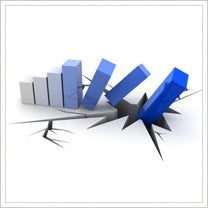 Yesterday, we reported on positive trends that developed as the year wound down. Today, we look at the naysayers who forecast more gloom ahead in 2010. Which view contains the truth about what 2010 holds for small businesses? Only time will tell.

Among the recent pieces of distressing news for small business:

Ã¢Â€Â¢ Trader-turned-reporter Henry Blodget of The Business Insider reported in November that sole proprietor's income has "fallen off a cliff" in the past year.

Ã¢Â€Â¢ A survey of its members by small-business Web site MerchantCircle showed only 20% agreed that the worst of the recession is behind us.

Ã¢Â€Â¢ Small-biz sales fell 3.75 percent in the first nine months of the year, according to Sageworks.

Ã¢Â€Â¢ Seattle-based TechFlash reported on a Foley & Lardner study of tech executives that found many accelerating their merger or sale plans, even though their valuations are rising. Why? They simply don't have the cash flow to keep going, even though 72 percent of respondents said they expect the value of their company to grow over the next two years.

Ã¢Â€Â¢ In October, major banks cut their small-business loan portfolios by another $1 billion, the Treasury Department reported. The 22 banks that participated in Treasury bailout programs did $11.6 billion less in small-biz lending from April-October.

OK, who's depressed? It's quite a litany of negative news. But is it yesterday's news, and will 2010 be brighter? Leave us a comment and let us know your outlook.