By Carol Tice December 31, 2009
Opinions expressed by Entrepreneur contributors are their own. 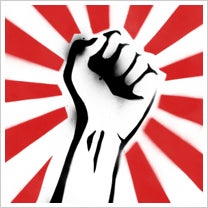 I'll tell you one of the most encouraging signs I saw in 2009: It was small-business owners in the streets, protesting.

I'm referring to business owners who rallied at sites around the country to oppose healthcare reform, in one case more than 100 of them gathering outside the Richmond, Va., offices of Virginia Senator Mark Warner.

I may not have agreed with their point of view, but that's not important. What's important is that small business owners were so fed up with the status quo that they had come out of their shops, out of their home offices, and taken the time to go out in public and stand up for what they believed would help strengthen their sector.

I think making a small-business turnaround happen in 2010 may take more street-level action. Are you up for it?

More often, when it comes to small-business concerns, owners seem to be too busy keeping their doors open to speak out, as when absolutely no business owners turned up at a November hearing on healthcare held by Massachusetts' insurance division in November.

You'll notice this movement is for health reform, where the street-protesting business owners were against it. That's OK. What's important is that small-business owners must become activists to get what they want--to break through the country's TV-induced torpor, the complacency, the home-field advantage to Big Business and their big lobbyists--federal policies that reflect the importance of small businesses to the economy.

For small businesses, it's Network time. Stick your head out the window and yell, "I'm mad as hell, and I'm not going to take it anymore!" Then go out the door, and out in the street. Find others, band together and fight for what you believe will help small businesses move the economy forward again. The alternative is another year like the last two.