Obama's $2B Plan to Boost Exports: Good for Small Biz?

Carol Tice
Owner of Make a Living Writing
February 8, 2010 min read
Opinions expressed by Entrepreneur contributors are their own. 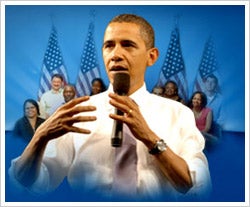 One of the things that's helped sink the U.S. economy into its current funk is our trade deficit, which stood at $36.4 billion in November. Translation: we imported $36.4 billion less than we sold abroad.

President Barack Obama has set a goal of doubling U.S. exports over five years. To that end, he's seeking a $2 billion raise, to $6 billion, in funds for the Federal Export-Import Bank to lend small-to-medium sized businesses to help them sell more abroad. By 2015, Obama is hoping SMB exports will jump 40 percent.

Sounds good in general--$2 billion more in available credit to the small-business sector. But will it really help?

The proposal seems to have mixed messages for small businesses.

Part the export-increase plan is a proposed 20 percent hike in the Commerce Department's budget for its International Trade Administration, to $534 million, even while Commerce overall slashes $5 billion from its overall spending. Commerce secretary Gary Locke said the plan will also mean increased federal effort to fight foreign opposition to U.S. goods and services, and adding more foreign commercial-service staff in fast-growing nations including India, China and Brazil.

Those still angry over how small businesses were done out of federal stimulus contracts may find some comfort in the $13.5 million the Ex-Im Bank says it will target for expanding its assistance programs for small businesses.

The U.S. Chamber of Commerce has come out in support of the plan, which they say supports their goals, including fighting the "economic isolation at home and abroad" embodied by "buy local" campaigns.

Whoa up there a minute! Many a local, small business has been sustained through the downturn only on the strength of "buy local" sentiment. My local bookstore, sporting-goods store and many others survive only because shoppers in my town of 25,000 want to keep their small-business community thriving.

A lot of small businesses would probably appreciate more help finding overseas markets. But it's unlikely small towns across America are going to knock off their "buy local" campaigns.

So who stands to benefit from adding small-biz assistance to help more businesses export? Small businesses with goods or services that would work abroad. The Chamber says 230,000 small-to-medium companies did 30 percent of U.S. exporting in 2008, double their number in 1992. So all proportions being equal, Obama's plan would aim to do what took more than 15 years last time in five years flat. Sounds ambitious.

Many small businesses are focused entirely on their local market, so the trade initiative won't help them. Few local restaurants will be exporting their pizza, for instance.

What's your take? Is $2 billion more for export loans a good move? Weigh in with a comment below.