By Carol Tice March 22, 2010
Opinions expressed by Entrepreneur contributors are their own. 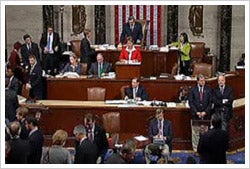 Not everybody was rejoicing at the House of Representatives' landmark approval of its long-fought healthcare reform bill. Business groups including the U.S. Chamber of Commerce, National Retail Federation and National Association of Manufacturers are on the stump to get the Senate to block the bill.

The Chamber called the House bill "dangerous," saying it will increase healthcare costs, jack up the national debt and raise taxes. The Chamber spent upwards of $10 million on an ad campaign opposing the bill prior to the House vote.

For its part, the NRF called the House bill an "anti-job experiment," that would cause already recession-shrunk retail employment to drop further.

The National Association of Manufacturers' opposition to the bill is a bit interesting, since the organization reports 97 percent of their members already provide healthcare. One of the big objections has been from smaller businesses that would be compelled to provide insurance or pay a fee.

It's unclear what will happen in the Senate. Senators could consider the House bill or its own version of healthcare reform, which would then have to be reconciled in committee with the House version.

What's your take on the healthcare-reform debate? Leave a comment and let us know if you're happy about the House bill or hoping the Senate will send reform to filibuster-land.