Retail is Rebounding Already -- Time to Get Busy!

By Carol Tice April 28, 2010
Opinions expressed by Entrepreneur contributors are their own. 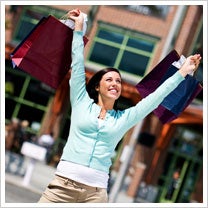 Can you feel it in the air? See it on your cash register? Retail sales are going up. In fact, they've been rising for six straight weeks, and have been mostly up for the better part of five months now.

The International Council of Shopping Centers is still playing it safe and forecasting April sales will be flat to down 3 percent, but look for their prediction to be low. It's time to wake up and smell the recovery -- and plan your strategy for capitalizing on the retail rebound.

Entrepreneurs seem to be getting the picture -- studies a month back showed a gloomy outlook but the April Discover Watch showed small-business confidence rebounding. The evidence that we may be on the way back up out of the downturn has accumulated until it's getting hard to ignore.

Retail sales have been steadily picking up since December, the ICSC data shows. December was up 3.6 percent, January 3 percent, and February 3.7 percent. Then March took off like a rocket, rising 9 percent -- though the early arrival of Easter is responsible for about half that increase.

Because of the Easter switch, many were braced for April sales to trend down. But it hasn't happened. April's sales gains so far look like this:

In the restaurant industry, Moody's upgraded the whole sector's rating recently, based on success cutting costs and a stabilizing outlook. Big publicly held chains are reporting traffic in their stores is up along with sales.

It's officially time to stop sitting around whining about the economy. It's getting better! If you don't already have a game plan for capitalizing on the upswing, now's the time to get serious about your strategy.

How will you take advantage of the first small signs of a recovery? Leave a comment and let us know.