Shrinking Our Carbon Footprint -- Will Small Business Take the Lead?

By Carol Tice April 29, 2010
Opinions expressed by Entrepreneur contributors are their own. 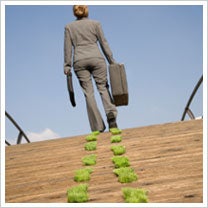 When you think about reducing our nation's carbon emissions, big companies tend to come to mind -- say, Walmart's recent announcement that it plans to cut 20 million tons of greenhouse gases by 2015.

But the federal government is looking to small businesses to play a big role in reducing our nation's ginormous carbon footprint, too.

Department of Energy undersecretary Kristina Johnson has been out stumping for small-business involvement in the green energy movement, speaking last week at the Small Business Innovation Research conference in Connecticut about additional funds SBIR is making available. The SBIR program this week said it is granting $150,000 to companies that have early-stage green-energy projects (up from $100,000 previously), and companies can get up to $1 million for products and processes that are closer to market stage (up from $750,000).

Another piece of federal green-energy stimulus that could potentially trickle down to small businesses: Federal funding for energy-efficiency building retrofits that improve weatherization and add solar panels, among other steps. The DOE announced $452 million is going to cities and states for these projects -- so track the money on recovery.gov to your local agencies to find out how your company might get involved.

5 ETFs to Cash In On Record High U.S. Household Net Worth